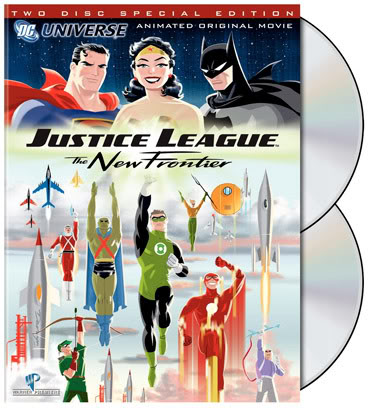 An area DC Comics has been pushing hard is animated adaptions of the company’s comic book properties, including last year’s Justice League: The New Frontier, which earned an Emmy nomination.

At a Comic-Con panel, DC publisher Paul Levitz and others discussed upcoming animated projects, including Wonder Woman. Newsarama has a wrap up:

Noveck says “Wonder Woman” is not an adaptation of a specific comic, like “Justice League: The New Frontier.” Instead, it features an original story by “Wonder Woman” comics writer Gail Simone and Michael Jelenic, with the screenplay by Jelenic. That approach was decided on because the character can be a tricky one to get right, Levitz says.

Voice director Andrea Romano says they like to use a lot of name actors for these projects and joked that fans can often tell what she’s watching on TV and in the movies by who she casts. She says, for example, she liked very much the film “Waitress,” which played a role in her casting Keri Russell as Wonder Woman. Russell was right for the part because she can convey both strength and the vulnerability the character needs as she adjusts to living in the world of men.

Other cast members include fellow panelist Nathan Fillion as Steve Trevor, Alfred Molina as Ares, Rosario Dawson as Artemis, Virginia Madsen as Hippolyta and Oliver Platt as Hades. Romano says Platt had to record his lines in New York and couldn’t be filmed in the booth because of the distance — which turned to be a good thing when his starched shirt made so much noise he ended up having to work shirtless.