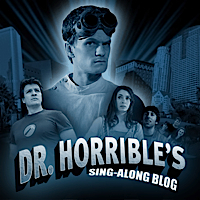 At San Diego Comic-Con’s Doctor Horrible panel, Joss Whedon and company used the opportunity to make a few announcements regarding the future of the Doctor Horrible franchise, as well as a surprise bit of information on the return of a popular character in the Buffy: Season Eight comics.

The big announcement of the panel was the development of a fourth act of the Doctor Horrible saga somewhere on the horizon. While they wait for Act IV, fans of Doctor Horrible’s Sing-Along Blog can expect the release of the soundtrack on iTunes in “a couple weeks.” In addition, for the planned DVD fans will be invited to submit their own three-minute video applications for admittance to the Evil League of Evil, the show’s writers will decide on the best 10 and include them as a special feature.

In news not related to the topic of the panel, Joss Whedon announced that fan favorite character Oz will be returning in the Buffy: Season Eight comics.

Featuring Horrible director and writer Joss Whedon, actors, Neil Patrick Harris, Felicia Day, Nathan Fillion, and Simon Helberg, as well as co-creators and writers, Jed Whedon, Zach Whedon, and Maurissa Tancharoen, if nothing else the panel served to confirm suspicions that Joss probably has the best job in the world.

One thing the panel was not short on was racy repartee, “It’s actually shaped like a hammer,” Fillion commented, referring to his popular line from the video, “I mean, little for a hammer…I showed Joss one time and he won’t shut up about it.”

“That was a great day,” Joss replied, “That was the day you got the part of Mal.”

Needless to say, Day’s proclamation that she was “twittering under here” met with a round of jokes we can’t reprint here.

Despite the fact that of the 17 questions posed by the audience, only three of them were on the topic of Doctor Horrible, the panel was able to consistently refocus or ignore the question entirely in order to stay on topic. When Joss was asked what his favorite moment from Buffy the Vampire Slayer was, the entire panel responded by discussing their favorite moments from filming Doctor Horrible.

Despite all the fun everyone was having, there were still a few chances to discuss the innovative distribution technique the Whedons used for Doctor Horrible, “The show is a model for doing things a little differently, and excluding some people from the creative process,” Joss said, smiling. He added that he has had a number of great experiences working with networks and executives, and the he considers this sort of distribution network an evolution, not a revolution.

Towards the end of the panel one questioner asked if there was a particular facet of Nathan Fillion’s personality that fit with the “dick” Captain Hammer.

“Besides being one of the kindest people,” Joss replied, “he is the smarmiest motherfucker on the planet.”

Finally, as a special thanks for those of you out there who made it to the end of our article, and own an iPhone, follow this link, www.thesoftwire.com/horrible_remote.html in order to get your own remote just like the one Doctor Horrible used to control the van in Act I of Doctor Horrible’s Sing-Along. Maybe Zach Whedon told us, but, we’re nice enough to pass the information on to all of you…

Check out our recent interviews with Joss Whedon about Doctor Horrible’s Sing-Along Blog and the various comics based on Buffy the Vampire Slayer, Firefly and Angel.