SHANNON DENTON, Writer of G-8 for RETURN OF THE ORIGINALS, MOONSTONE BOOKS 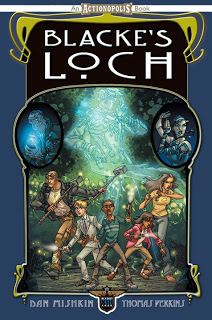 AP: I think it’s safe to say you can be considered a Renaissance Man given the diversity of your creative output.  To what do you attribute your success is so many different, yet related fields?


SHANNON ERIC DENTON: Thanks! I do like the occasional Renaissance fair and I’m pretty certain I have ADHD. So I guess that may cover the Renaissance aspects as well as the diversity. To be honest, I have no idea. I like to try new things. It’s not always a success but there’s a definite satisfaction in looking at some new field, psyching yourself up to give it a try, and then through grit and luck finding a way to do it.
AP: Tell us about Komikwerks

SHANNON ERIC DENTON: Komikwerks originally came together as a conduit for a collective of professional artists and writers from many different creative fields, who wanted to publish their creations free of editorial and corporate restraint, as well as not being confined to the standard 22 page format comic. Lately it’s morphed into the publishing arm for our ACTIONOPOLIS line of books. At the end of the day, it’s a home base for Patrick Coyle, Rob Worley, and I to pursue our pet projects.

AP: I’m a major Western fan so naturally I’m interested in “Graveslinger” Tell us what that’s all about.

SHANNON ERIC DENTON: Graveslinger is a fun supernatural western (and nominated for a 2010 Harvey Award to boot). The story centers around an prison undertaker on his quest to put 117 of the West’s worst killers back in their graves. After a supernatural mishap, these 117 formerly executed killers rose up en mass and set out to plunder anew. Now only one man, our undertaker hero, has what it takes to put them down for good. We have another Graveslinger book set to come out from IDW too so be on the lookout for an announcement on that. SHANNON ERIC DENTON: G-8 is an ace pilot and a master spy. He’s an adventure junkie with a heroes heart. I’m hoping in our run to establish a bit of why he’s so driven to do what he does without taking away anything from the original run. I’m a big believer in not reinventing stuff that’s already working. Instead I’m hoping it’ll be more like getting sneak peaks between the stuff you already know. 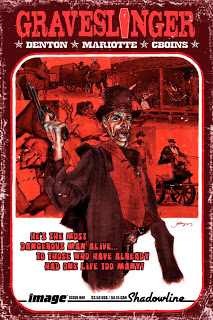 AP: So why Pulp?  Have you always harbored a secret desire to be a pulp writer?

SHANNON ERIC DENTON: I have. In my public library as a kid, I had access to a lot of classic old pulps. Come summer, I’d pour through those books. I loved superheroes but ya had to have money to buy comics so that was a once a month purchase for me.  These were free at the library so they’d tie me over till I could get my monthly dose of Spider-Man and Teen Titans at the 7-11.

AP: You’re writing G-8 for Moonstone as part of their “Return of The Originals” project.  How’d you get G-8, did you request to write him?

SHANNON ERIC DENTON: I expressed an interest in the line and they suggested G-8.  My AiT book ACES was partially inspired by G-8 along with Spy Smasher, Black Sheep Squadron, Air Wolf and a million other aviation heroes…including my dad who was a Naval aviator. I just always grew up around pilots and on air bases so it’s always going to be fascinating to me.
AP: Who is G-8?

AP: Why do you think there’s such an interest in pulp adventure and pulp characters now? 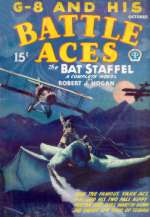 SHANNON ERIC DENTON: As long as folks continue to like high adventure and the world still has bad guys that need clobbered by men with the wherewithal to do so, I think Pulps will always have an audience.

AP: What’s a Day In the Life of Shannon Denton like?
SHANNON ERIC DENTON : We just had a baby so these days it’s 15 minute naps, no sleep at night, and making comics in between all of that. Oh, and it’s football season. Luckily because I’m not sleeping anyhow, I’m finding more time for football as well as work this year so who knows. On the weekends I try and take my boys hiking to as many of the National Parks and National Monuments as I can.
AP: Here’s your chance for a shout out or to recommend something.  Go.=an>
SHANNON ERIC DENTON : If you like adventure, please check out our www.actionopolis.com books!  Great stories from a ton of great writers!
AP: Anything else we should know about  =an>Shannon Denton?
SHANNON ERIC DENTON: I am always available for freelance! (freelancers motto). Outside of that, i just hope everyone enjoys what I have coming up this year and feel free to follow me on the Twitter and Facebook.  =n>It’s always nice to hear from folks. Be sure and let your comic shop know about G-8 also!
Share