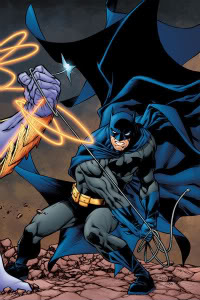 Things started to coalesce in last week’s Trinity #5, and issue six keeps moving in the right direction with DC’s big three coming to realize there’s a big problem building, and they’re at the center of it.

This issue has dueling narratives, one part featuring Tarot now hiding out from Morgaine Le Fey’s wolf monsters. Tarot continues to see weirdness in her tarot cards, but she dives into it, seeing Superman, Wonder Woman and Batman appear on the cards and in her dreams.

There are some obvious elements in the cards — Superman on The Sun, Wonder Woman on The Earth and Batman on The Moon — but also a few more mysterious ones. Batman appears on The Magician, and Superman shows up on The Hanged Man, with the drawing making him look like Christ on the cross. Hmm…

Meanwhile, the big three themselves are up in the JLA space station trying to figure out what’s going on and not having much luck. The brand left on Diana’s shoulder by another of Morgaine’s monsters gives them worry, and again Kurt Busiek’s character moments are done quite well.

The two narratives come together as the heroes and Tarot both talk over the nature of the trinity, and their identities as heroes, how they each represent different faces of the same ideal. One strange aspect is that in Tarot’s dream, the people around each of the heroes have no faces, like the Question. Hmm…

But before we can get to any definitive answers, a pack of Morgaine’s monsters crash into Tarot’s hiding place and run off with her. Left behind is Tarot’s friend, the newly unveiled Gangbuster.

That takes us to the backup story, where Hawkman is bludgeoning minor villains who are staging a series of thefts of mystical items from museums across the country. At one museum, he runs across Gangbuster, who’s traced some of Morgaine’s henchman to the same spot, and the heroes compare notes and eventually agree to continue on together.

It’s a decent enough sequence, and it’ll clearly become the main plot next issue as Hawkman and Gangbuster meet up with the big three. Still, we’re left with no more concrete understanding of what the maxi plot of this series will be.

Also, Fabian Nicieza wins an award for stupidest nonsensical superhero jargon of the week for this inner monologue from Hawkman: "Wings made of Thanagarian metal let me go suborbital. Parabolic arc gets me to LA in thirty-four minutes."

So, what’s the verdict?

Another decent week that earns points for a lack of stupid villains — unless you count the wolf monsters — and the plot continues to be more unified than the earlier issues. Still, we keep hearing there’s a great mystery going on, but it remains so opaque that it’s hard to be overly interested.