Getting Reality Right, by Dennis O’Neil 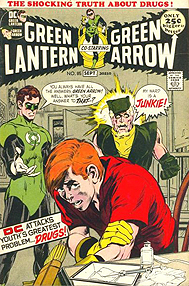 Vinnie Bartilucci said it better than I did. Commenting on a couple of columns that asked, sort of, if the science in comics should be real, Vinnie wrote, “… once a writer chooses to mention actual, proper science, he should get it right.”

But I wonder if we shouldn’t extend the idea to other real life areas. Social problems, for example.  Or such knotty personal problems as addiction. One of the difficulties is, there isn’t the kind of consensus on personal and societal quandaries that there is on the basics of, say, physics. All but the most skeptical – or reactionary – can agree that Newton’s three laws are on the money and Einstein was right about relativity, both general and special, and even Heisenberg’s principle doesn’t seem terribly uncertain these days.

But, to pluck just one example from the ether…addiction? What, exactly, is it? My imperfect understanding is that many, if not most, addictions are caused by environment acting on genetics. In other words, nature and nurture combine to rot out somebody’s life. But, with patience, determination, and rigorous self-honesty, the addict can put his demons in the coal bin, and if he’s able to continue being patient, determined, and honest, they’ll stay there until he dies and they die with him. Addiction is not exactly a disease, in the conventional sense, but it’s more that than character defect.

That was, more or less, the version of addiction I posited in an extended comic book continuity some years ago, and most people who saw the stories seemed to agree with me. But not everyone. A source I trust told me that a person much higher on the corporate food chain than either my editor or me thought that the fictional addict should have just…I don’t know – snap out of it? (In fairness to all concerned, the executive in question never confronted me personally, so I am taking a trusted somebody’s word for what happened.) On another occasion, an excellent artist, a man I respect, refused, politely, to draw a one-page shot of a hero dreaming he was drunk – just dreaming, mind you – because, in the artist’s opinion, heroes don’t behave like louts, even when snoozing.

I think both of these people are, on the whole, wrong, but I’m not as convinced that they’re wrong as they are apparently convinced that they’re right. One size, alas, never fits all. I know of no junkie or juicer who just snapped out of it and got on with his/her life, but I also don’t doubt that it could have happened.

In matters such as these, the truth is slippery.

So what’s a comic book writer to do? Not address difficult topics at all? I think not. We ought to do anything that we can do. Rather, we should simply tell the truth as we know it with these provisos: don’t think you know the truth because what you’re positing is what you’ve always believed and don’t think you know the truth because Dad, or gramps, or teacher, or Father Flotsky down at the parish hall tells you it’s the truth. If you don’t exactly know how you know what you’re presenting, do some research? Then write the best damn story you can.

RECOMMENDED READING: The Comics: An Illustrated History of Comic Strip Art, by Jerry Robinson. This is an early, but still valid and entertaining, look at the subject written by one of the medium’s truly great guys.

Dennis O’Neil is an award-winning editor and writer of Batman, The Question, Iron Man, Green Lantern, Green Arrow, and The Shadow – among others – as well as many novels, stories and articles. The Question: Poisoned Ground, reprinting the second six issues of his classic series with artists Denys Cowan and Rick Magyar, is on sale right now, and his novelization of The Dark Knight will be available in a heartbeat.