All around, a great week for comics even in the face of a few serious missteps. And while the latest Secret Invasion was quite good, it was the monthlies that really kicked into high gear. Let’s get to the reviews… 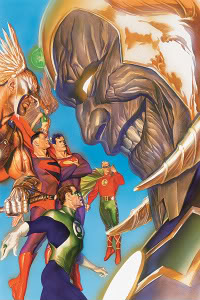 Book of the Week: Justice Society of America #17

— This book hit a pretty serious lull in the middle of the Gog storyline, as Magog went away and Gog (an apparently benevolent god) made his presence known.

The latest issue is all about that old axiom, be careful what you wish for. Gog is on the peacepath, so to speak, and turns his focus on the members of the JSA, granting their deepest desires.

But his altruism cuts both ways. Damage gets a new face and Pieter regains his sight, while Starman becomes sane ("not a good thing") and Power Girl is transported home… wherever that is.

It’s a slickly done issue by Geoff Johns, who crafts an extremely dangerous story without a whiff of a villain. This series had been needing a kick in the pants, and this issue was a big swing of a steel-toed boot.

— Even better than Secret Invasion

is this spin-off title, which has the Skrulls invading Britain as part of their global conquest. This is one jam-packed issue, with epic fight scenes, tough decisions and even a believable turn from Merlin.

The expected rebirth of Captain Britain was goose-bumps good, and my only complaint is that this Skrull battalion is all fighting and no subterfuge, as they don’t utilize that huge shape-shifting advantage.

, except with monsters, zombies and filthy humor. Eric Powell maybe goes a bit too far in places, but all in all it’s a damn fine issue, and his art is brilliant as ever.

Nova #15 — Just another top-notch issue in this series, as Richard tries to escape Orbucen before it ends up in Galactus’ small intestine. He gambles and makes it out, but Worldmind might not have made it, which leaves Richard talking to his much-less-intelligent armor. Add in a tense fight and a nice moment with Silver Surfer and you have one hell of an issue.

— Really only half of an issue, but it’s nice to see Cap back and the Loeb-Sale combo clicks on all cylinders in this retelling of Bucky’s origin. It’s essentially the antithesis of what Frank Miller is doing with Robin over in All Star Batman and Robin

. Good stuff, but there’s really nothing new here so far.

Chuck #2 — The second issue of the TV adaptation is possibly even better than the show itself, with a broader scope (fighting Yakuza in Tokyo), great art and consistent humor. Ninja accountants? Fish-slapping? Count me in.

B.P.R.D.: The Warning #1 — A bit sprawling, as the issue bounces along between the various team members, and the stakes don’t quite feel that high yet, with all the drama happening in dream worlds. 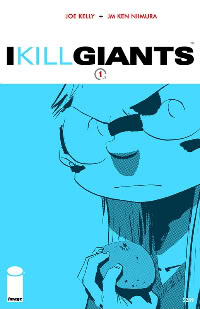 I Kill Giants #1 — For the Nth time, it’s a story of unpopular kids struggling through school, but this one works because of, in equal parts, the skillful characterization and the cartoony/indie art.

— One of the best issues of Skrullapalooza yet, with both sides trading punches (literally and figuratively) and the heroes hamstrung by trust issues. With Tony Stark looking less like a Skrull and the big guns on the way for the heroes, it looks like the fight is about to get a bit more fair.

— After last issue’s explosive finale, Tony Stark is left picking up the pieces, including Pepper Pott’s battered body. He’s left scrambling, while Zeke Stane continues building toward the inevitable confrontation. And maybe that’s why this series hasn’t wowed me yet — it’s been predictable thus far.

— A step down after Geoff Johns’ brilliant last issue, but still a good read, as we come to know how little we know about Brainiac. There’s also a strong Supergirl moment in there, which only makes me wish Johns would revitalize that character too.

Pilot Season: Urban Myths #1 — Your typical private eye story, except that the PI is Medusa’s son. As fun as that sounds, the issue unravels like a cheesy action movie.

— Hush returns and brings some serious mommy issues along, which isn’t necessarily a bad thing, but this issue deserves the boot more than anything for the "Batman RIP" logo on the front. This has nothing to do with Batman RIP, and I can only think back to Dan DiDio’s words at Heroes Con as he reminded a crossover-weary fan that the Ra’s al Ghul tie-in books all sold much better than regular issues.

Indiana Jones and the Tomb of the Gods #1

— Absolutely nothing here that hasn’t been seen before. Just go watch Raiders of the Lost Ark again.