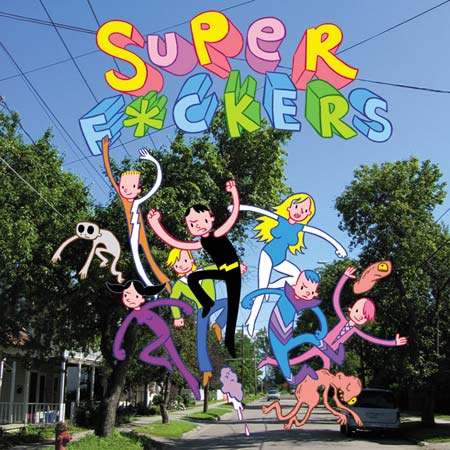 Reading the reviews about previous editions of James Kochalka’s Superf*ckers I was thinking this was going to be an amazing satire of the super-hero genre, poking fun at teams from the Justice Society of America to the Thunderbolts.  Over the years, Kochalka had been doling out one issue at a time, starting with Superf*ckers #271 in 2005 and released a fourth issue in 2007. Top Shelf has collected the four issues with the previously unpublished [[[Jack Krak #1]]] in a new collection released earlier this year.

I don’t get the praise. Not at all. Kochalka’s robbery figurework is good for his childrens’ books and other independent works but when it comes to super-powered, hyper-sexualized characters, it feels entirely wrong.

Kochalka cuts between combinations of heroes one-upping each other, excreting with abandon and he paces these various threads nicely enough. He crams each page with plenty of panels and action, brightly coloring everything in what must have been a painstaking manner.

Amazingly, at the outset, Kochalka thought this might be an all-ages title but as he got further into this, he couldn’t prevent his annoying heroes from cussing so it has remained a book aimed at older readers. “And it makes the action more dramatic,” he told Comic Book Resources. Not at all. The cursing and invective permeates every pages as do the acts that should never be attempted at home.

I remain baffled why anyone things this is a laugh-out loud must-read series. In the same interview he said, “On the surface it’s fun and breezy romp, but underneath it’s a layered satire of American society, the comic book scene, power and pathos and the human condition.” That might have been his intent but the execution fails to measure up.