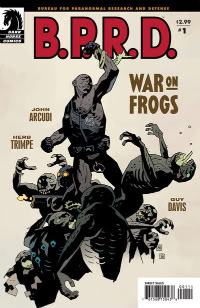 This summer is a big one for Hellboy fans, and not just because Hellboy II: The Golden Army hits theaters on July 11. Dark Horse is releasing several comics from Mike Mignola’s Hellboy world.

The co-author on several Hellboy and B.P.R.D. books, John Arcudi recently chatted with me and gave some sneak peaks at B.P.R.D.: War on Frogs, B.P.R.D.: The Warning and the B.P.R.D.: Ectoplasmic Man one shot.

Dire times are coming to the B.P.R.D. crew, Arcudi warned, and no one is safe.

COMICMIX: What can you tell me about these new series, War on Frogs and The Warning? They take place before and after Killing Ground, respectively, right?

JOHN ARCUDI: WoF takes place in the past, back in 2005 during the era of the Black Flame, while The Warning picks up about a week after the end of Killing Ground and will kick off the large three-part arc that brings the Memnan Saa storyline to its conclusion.

CMix: The Warning sounds like it’ll be focusing on Liz quite a lot. What can we expect for her? What are the big issues she’s facing?

JA: Well, she thinks she’s finally free of Memnan Saa’s control and so she’s in a hurry to kick some butt. His butt. Liz is interesting in that she seems to always be looking for an authority figure, for someone to point out the direction in life she should follow – due, undoubtedly to the premature deaths of her parents (at her hands, no less). If you go back to Hollow Earth, you see Liz leaving the B.P.R.D. to find herself in some temple at the top of the world. She doesn’t go and ride a motorcycle across the country, she goes and asks somebody else for help. This may be what made her susceptible to Saa’s thrall in the first place. And that is the personal story nugget at the core of this very far-reaching, cataclysmic epic tale. 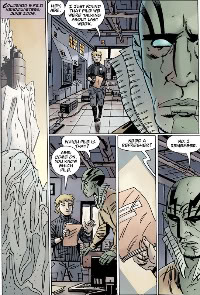 CMix: And what’s the story with War on Frogs?

JA: WoF is a series of four single-issue stories, each focusing on one member of the B.P.R.D. during the time that the Frog War really got big, which was what the Black Flame was all about. So first we have Roger, then Abe (which was a real challenge, given what Abe was doing back then), then Johann, and finally Liz. They’re loosely connected, but they are each stand-alone stories. And yes, Roger’s story has its origins in Seed of Destruction. We’re just trying to tie up some loose ends… that nobody even knew were loose.

CMix: It sounds like things are building up to a head in B.P.R.D. Should we be scared for any of the crew? All of them?

JA: All of them, definitely!

CMix: Any chance we’ll be seeing more of Daimio soon?

CMix: I interviewed Josh Dysart a bit back, and he mentioned how surprised he’s been that the Hellboy franchise continues to expand, but it continues to keep a high quality level. What do you attribute that to? 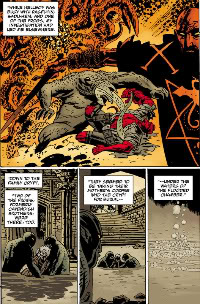 JA: I think if Mike had decided to just go nuts and put out as many books as possible, you’d be seeing a drop in the quality. He’d have to get lots of writers and artists, and couldn’t be too particular. But when you think about it, as far as writers go, only Mike, Josh and I are working on these books – and  Mike keeps his eye on both of us, keeps his hand in. So, sure, the universe is expanding, but not at a phenomenal rate.

CMix: Is it a challenge to craft the B.P.R.D. books in a way that keeps readers hooked, even when Hellboy himself isn’t involved?

JA: Writing is plenty challenge for me, so I don’t put more pressure on myself by thinking about who is NOT in the story. And more to the point, I never wrote Hellboy, so I don’t miss him, really. The few chances I had to write him were fun, but he’s not on my radar. No, Mike and I just try to write good stories, and that’s hard enough. Most times, when you do good work, people will buy it, and we’ve been lucky on that count.

CMix: What has kept you so interested in this franchise that you keep coming back for more stories?

JA: I’ve come to see these as my toys. Don’t tell Mike that, but it’s true. I always do better work when I feel that the characters are mine, so until I stop feeling that way…

CMix: Which characters are your favorite to write? 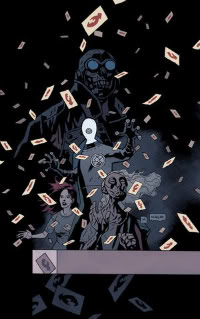 JA: Boy, it changes a lot. Lately, Johann has been a blast, frankly. Kate, actually, I enjoy quite a bit. She’s kind of the “straight-man” for this crew, and that makes her very relatable to me. Wouldn’t really say these are my favorites, but this week, I love `em.

CMix: How do you and Mike work together on writing? I’m sure you two have a pretty good system by now.

JA: No system, really. Every series is different. I’ve said this before, but I know of no other  way to answer this question  – sometimes Mike hands me a plot and I work from that, sometimes I tell Mike my plot and he adds things, sometimes Mike writes his part and I write my part. It just depends on what the series needs to be. Sounds stupid, but hey, it’s been working so far.

CMix: Each of you have pretty different sensibilities and backgrounds. How do those fit together (or not) while putting together a story?

JA: Well, we really don’t have so different sensibilities. I mean, yes, okay, he tends to be more mysterious and I more quotidian about the content of our stories, and if I were writing Hellboy, that might be a problem. With B.P.R.D., however, it stays just mysterious enough to keep the reader guessing and teased, while detailed enough so that the reader can better understand this unwieldy cast of characters.  That’s the key. Each character needs to be given his due. That’s why I think Mike and editor Scott Allie wanted me, because I just love getting into their heads. (The character’s heads, not Mike and Scott’s.) 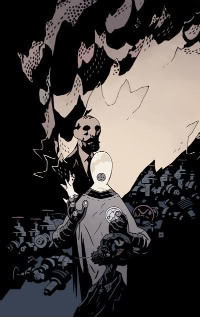 CMix: Is it exciting to be working on a Hellboy property at the same time the new movie’s about to come out? Have you had a chance to get involved with the movie at all?

JA: They don’t let me near that movie stuff. It’s a whole different continuity, really, so the less they talk to me, the better.

CMix: Any word at all about more Major Bummer, comics or otherwise?

JA: Ahhh, Major Bummer. Everybody asks me about this book. Everybody! How did it ever get canceled?

CMix: Are you working on anything else right now that you can talk about?

JA: I can’t believe I talked this much about B.P.R.D.!