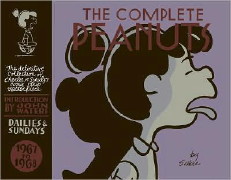 By 1967, [[[Peanuts]]] wasn’t just another comic strip in the local newspaper, it was a media phenomenon. The first TV special, A Charlie Brown Christmas

was about to open on Broadway. It was the epitome of mainstream entertainment – on May 24th, California Governor Ronald Reagan and the state legislature even proclaimed it “Charles Schulz Day.” The strip hadn’t quite hit its ‘70s mega-merchandising heyday, but it was getting there.

At the same time, not all that far from Schulz’s Santa Rosa home, Berkley was roiling with anti-war fervor and the Summer of Love had hit San Francisco. Peanuts had been seen as an edgy, almost countercultural strip in the early 1950s, but those days were long past, and Peanuts was the Establishment. In those days, you were with the pigs or with the longhairs, right? And where did Peanuts stand?

From the evidence here, Peanuts stood where it had always stood: on its own, only rarely commenting on specific issues of the day (such as the “bird-hippie” who would become Woodstock in another year or two), but talking around those issues in ways that most of America could laugh at… some more uncomfortably than others. Schulz was never one to declare himself on one side of an issue or the other; he’d just write and draw his cartoons, and let others make their interpretations.

And the fact that the introduction to this book is by John Waters says a lot as well – not just that Fantagraphics (land of hipsters) would ask him, but that he’d agree, have such deep memories of Peanuts, and write about the strip in such a heartfelt way.

The extended sequences in these years don’t usually have much to do with events in the larger world – Snoopy gets some WWI Flying Ace time, heads to a wrist-wrestling championship and the Grenoble Olympics, and goes to see his sick original owner, Lila. And of course there are two years worth of Great Pumpkin, Beethoven’s Birthday, kicking the football, Kite-Eating Tree, and baseball season strips – by this point, Peanuts was pretty seasonal, with regular events coming at the same time each year, though Schulz was still able to ring new changes and keep it all fresh in 1967 and 1968.

But the big event was a character who first appeared in three strips in the middle of the summer of 1968: Franklin, a black kid who built a sand castle with Charlie Brown on a trip to the beach. Such “race mixing” made a lot of people uncomfortable – there was a flurry of letters to the editors of Peanuts’ newspapers, complaining about the “politicization of the comics page” and demanding that it never happen again. Schulz clearly didn’t listen, and upped the ante: Franklin appeared again in October, visiting Charlie Brown’s neighborhood (shades of “forced busing,” yes?) briefly but leaving because of all of the oddballs.

And when the angry letters continued, Schulz didn’t flinch, but raised again: in later strips, Franklin sits with Peppermint Patty in the same classroom. (Giving the complainers a heart attack, in those days when segregation was still a very live issue.) It’s important to remember controversies like that – ones that seem dead and gone, that seem pointless – because the spiritual children of those angry 1968 letter-writers are still out there. This year they’re not complaining about “race mixing” or those uppity minorities not staying in their place, but about gay marriage being “jammed down their throats.” But it’s the same tune: they want the people they don’t like to stay far away, out of sight and out of mind, so they can get on with their lives.

And if there’s one thing Peanuts never trafficked in, it was willful blindness. Schulz’s characters were tormented by many things, but they always knew it. Charlie Brown’s anguish was all the worse because he knew he’d probably fail at whatever he tried, and his stomach hurt more than any other comics character before or since. But he still went out there, to pitch another losing game or try to kick that football. That old roundheaded kid will always have another lesson to teach all of us.

Physically, the book is the usual classy Fantagraphics production, designed as usual by Seth. The cover is a bit more colorful than the general run of the series, which is only appropriate for covergirl Violet. (And it’s also good that she’s getting on the cover now, since she won’t have much of a chance later. I doubt Shermy will ever hit a cover, and, now that Peppermint Patty has appeared, the original Patty won’t have a shot, either.) The index is as amusing as ever, with entries for such unlikely things as Sandy Koufax (p.46), supply sergeant (5), the CIA (p. 41) and goop (221, 222). I read it straight through, but it might be as amusing to poke through the index, looking up the strips by theme or character.

Peanuts is one of the great American comic strips, a major work in one of major American art-forms. And [[[The Complete Peanuts, 1967 to 1968]]] sees Schulz still working at or near his peak, following his characters where they lead him. If you haven’t been following this series, grab this book, or whatever one you see first – at this point, they’re all good.