Review: ‘Dollhouse’ Season One on DVD 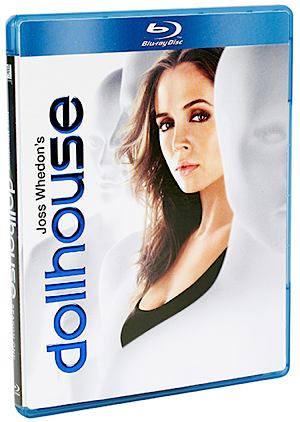 There are television creators who are placed under the microscope every time they produce something new, hoping it will generate the same pop buzz and ratings success of their previous series. While a Jerry Bruckheimer can churn out cookie cutter series, the ones with more unique and distinctive voices tend to be more hit or miss. In Joss Whedon’s case, he followed [[[Buffy the Vampire Slayer]]] and[[[ Angel]]] with [[[Firefly]]]. While a cult favorite, the series and its feature film incarnation failed to win the wide audience required to remain viable. As a result, all eyes were on him to see what his next trick would be and most were cautious given that the new series [[[Dollhouse]]] would appear on Fox, where a previous regime sabotaged Firefly through ineptness.

People cringed when the new show, featuring Whedon-alum Eliza Dushku, was given the dreaded Friday night at 9 slot but were also given fewer commercials allowing more show time allowing Whedon’s characters to come to life.

Dollhouse divided critics and fans and the ratings were iffy at best so the real surprise in May was that the show was renewed at all. Now, during the summer, about two months before the series returns, Fox is releasing a four-disc first season set on Tuesday. They provided the first three discs for review, reserving the fourth disc for consumers to discover on their own. That disc contains the unaired thirteenth episode that could well have been a coda to the series had it been canceled and shone the spotlight on Amy Acker’s Active, codenamed Whiskey. Here’s a clip:

As far as the box set is concerned, the transfers are lovely and the
show deserves being watched in sequence a second time. The commentary,
from Whedon and Dushku, could have been a lot stronger but meanders
more than it enlightens.

The series uses a fresh concept for the
backstory but it was clear the series continued to quickly evolve so
things rose and fell in importance making it feel more disjointed than
one would expect from Whedon who excels at strong myth creation.

We
have the Dollhouse, where people agree to have their minds wiped and
new personalities and skills applied to fulfill the desires of the
wealthy clients.  While people willingly sign up to be Actives or
Dolls, there’s the whole issue of these people essentially being pimped
out to those who wish to take advantage of them. Internally, staff has
also taken advantage of the Dolls, causing problems for the
administrator, who has also used the Actives for her own personal needs.

That
there are other branches was a late addition, a throwaway line, but one
you wonder about. The Federal Government doesn’t believe in the urban
myth but the fact that there are several branches increases the odds
that someone would spill the beans. Instead, we have the disgraced FBI
agent on a one-man quest to prove the Dollhouse is real. Of course,
they’re on to him and have deployed November to keep tabs on him –
until some mysterious faction has also used November to issue him
warnings.

The dozen episodes displayed some nice uses of the
Actives for things beyond sex and companionship. One of the most
poignant was “Man on the Street” with Patton Oswalt hiring an Active to
recreate his last happy day with the woman who was tragically taken
from him.

After spending all season seeking the Dollhouse, Paul
Ballard finds it, helps them confront Alpha (who was an unseen threat
to date), and then he just willingly signs on as a “consultant”? Uh
huh. The entire thread of people working within the Dollhouse to help
Paul also vanishes in the finale without resolution. Caroline/Echo’s
returning memories also seems to have gone unnoticed by the staff that
seems to notice everything else. The show really never gelled while
many of the actual assignments were interesting.

The cast is a
nice blend and filled with Whedon veterans such as Dushku and Acker but
also brings us the excellent Harry J. Lennix, hunky Tahmoh Penikett,
Olivia Williams, engaging Enver Gjokaj, newcomer Miracle Laurie, and
the way too-thin Dichen Lachman.

The surprising second season
renewal also comes with the promise of a revised status quo which I
hope is better thought-through and more sustainable than what we have
so far.