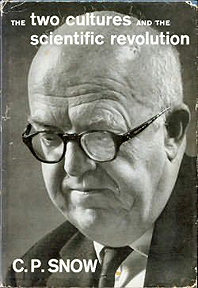 The following will be about a column I didn’t write and it’s Vinnie Bartilucci’s fault. But that’s okay. I forgive him.

What Mr. Batilucci did was beat me to recommending Physics of the Impossible, by Michio Kaku. This Mr. B. did in a comment on last week’s column which, some may remember, described how awkward I felt being a published science fiction writer who was abysmally ignorant of science and how one of my earliest attempts at remedy of this ignorance was reading One…Two…Three…Infinity, by George Gamow.

My plan was to save recommending Dr. Kaku’s much more recent book – it’s on current best-seller lists, in fact – for this week.

Said recommendation would have come at the end of a blather that would have mentioned yet another elderly book, The Two Cultures, by a remarkable man who was both a scientist and novelist named C.P. Snow. According to the endlessly useful Wikipedia, “its thesis was that the breakdown of communication between the “two cultures” of modern society – the sciences and the humanities – was a major hindrance to solving the world’s problems.” I encountered Mr. Snow’s slim volume in college, probably when I should have been reading something some teacher had assigned, and it must have impressed me. (I mean, here we are, all these years later, and I still remember it.) The unwritten column would have culminated in the reiteration of something I mentioned some months ago, advice from my first comic book boss, Stan Lee. Stan said, in effect, that it’s a waste of space to “explain” comic book “science” because readers will accept what we tell them.

I might have added, if I’d written this week’s column, that even if we know the science, it might be difficult to insert it into an entertainment without wreaking havoc on drama and structure and pacing and all that Fiction Writing 101 stuff.

Again, I would have suggested, had Mr. Bartilucci not stolen my thunder, that we should not pervert real science. As I wrote in that earlier piece, “readers who know and respect the reality will be yanked out of your fictional world if you get it wrong and insult their intelligence, perhaps never to return, and you don’t want to abet the alarming ignorance about science that seems to prevail in our nation… made-up technology is fair game, made-up basic facts aren’t.”

Once, a long time ago, I edited a story by a writer I know to be smart and talented in which galaxies seem to be confused with solar systems. A fifth grade mistake – or, at least, it should be a fifth grader. But given the dismal performance of our young scientists and mathematicians, maybe my writer’s error was normal. (In a recent survey of 30 countries by the Organization for Economic Cooperation and Development, U.S. kids placed twenty-first in science and twenty-fifth in math. Sad, huh?)

I might have concluded the never-to-be-perpetrated column with the proposition that writers, even writers of fantasy melodrama, shouldn’t augment the world’s ignorance.

RECOMMENDED READING: Well, since this week’s column didn’t get written, I can’t recommend anything. But any books whose titles you may have come across in…oh, say, the last ten minutes might be worth your time.

Dennis O’Neil is an award-winning editor and writer of Batman, The Question, Iron Man, Green Lantern, Green Arrow, and The Shadow – among many others – as well as many novels, stories and articles. The Question: Poisoned Ground, reprinting the second six issues of his classic series with artists Denys Cowan and Rick Magyar, is on sale right now, and his novelization of The Dark Knight will be available in a couple weeks or so.