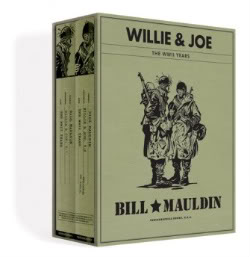 , Bill Mauldin’s World War II cartoons are given a deluxe treatment, from the Army-green canvas covers to the oversized printing of Mauldin’s voluminous output.

The only thing publisher Fantagraphics couldn’t overcome in producing the book was the rough condition of much of Mauldin’s cartoons depicting the life of soldiers. As much as that might seem a drawback, editor Todd DePastino turns it into one more thing to appreciate about Mauldin: His cartoons often suffered because the young soldier/illustrator created them on the front lines.

It’s a truly beautiful collection, and one befitting the legacy of Mauldin, who died in 2003 (I reviewed DePastino’s biography of Mauldin right here). The first volume picks up with Mauldin’s first cartoons in a school paper (DePastino faced the tough challenge of tracking down all of Mauldin’s published work), then transitions to his time in the Army, first in Oklahoma and then overseas.

Through the cartoons (and DePastino’s well researched notes), we can see Mauldin grow as an artist, a person and a soldier. His first cartoons offered harsh stereotypes of Native Americans, but after Mauldin served with a largely Cherokee unit, his lasting desire for equality began to come to the fore.

Once in Europe (he spent much of his time in Italy), Mauldin’s cartoons developed a much harsher tone. He had always used his forum as a way of speaking up for the rest of the average troops, and that need became literally a matter of life and death when Mauldin witnessed the carnage of war. 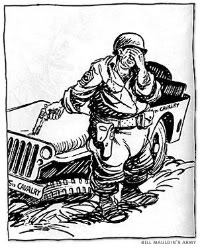 Of his cartoons, which largely feature non sequiturs about army life, Mauldin once said he wasn’t allowed to draw all the violence he saw, so he tried to craft each image to suggest bodies resting just out of view. As the war trudged on — and soldiers became more hardened — Mauldin developed the characters of [[[Willie and Joe]]] (who was not, as many think, the basis for G.I. Joe) and their famed shaggy, exhausted visage.

Mauldin was a meticulous artist, spending time on the front (and taking shrapnel in his neck) to make sure he perfectly captured the soldiers, their weapons and their environment. Still, it is the tired eyes of Willie and Joe that seem to most fully represent the war experience.

The cartoons often offered a harsh view of officers, showing them enjoying a privileged experience while the “dog faces” suffered through a lack of supplies and respect — and the constant endangerment of their lives. The backlash against officers hadn’t yet reached the violent level seen in Vietnam, but the sentiment was present, and clearly fed into Mauldin’s near-universal popularity among the soldiers.

One of the most impressive things about the cartoons — beyond simply how many of them Mauldin created — is the humor. They are relentlessly bleak, but nevertheless consistently very funny. Yet, the jokes were crafted for soldiers to enjoy, meaning many additional layers of humor exist beyond what us military outsiders can appreciate.

Even at war’s end, Mauldin kept his critical eye pointed at the powers that be, lamenting the slow and painful transition into civilian life for Willie and Joe (he’d wanted to kill them off, but was talked out of it). By that time, Mauldin was a man by experience if not by age (still only in his early 20s).

As World War II veterans gradually fade from the world, these cartoons remain as one of the truest records yet of their triumphs and their pain. For as detailed as films by Ken Burns or books by Tom Brokaw are, none of those offer the intimate view of life on the front as presented by Bill Mauldin.