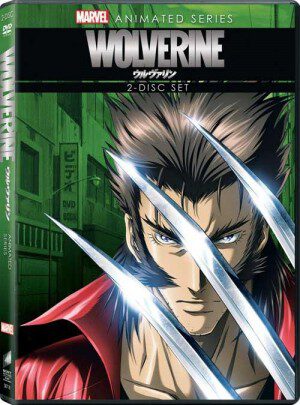 Marvel’s attempt to bring their characters into the world of anime didn’t fare terribly well as four series from Madhouse arrived and sank without much of a ripple. Conceived and vaguely interconnected from Warren Ellis, the projects had noble goals but failed to excite or even tell great stories.

You may have seen them on G4 since they weren’t important enough for the major animation channels or you might have caught Iron Man and X-Men when Sony Home Entertainment released them a few months back. Coming Tuesday are the final two, Blade and Wolverine, and these are no stronger than their predecessors. On the one hand, the color palette is nicely chosen to lend atmosphere to Blade, but then the animation is so stiff and limited vampires and people alike seem to be moving through sludge.

Wolverine, actually the second of the quartet to air from January 7 through March 25, 2011, concerns itself with a search of Mariko Yashida, gone an entire year, and winds up having him slice his way through the Yakuza and AIM. We learn that his paramour had been taken by her father so she could wed Hideki Kurohagi and we’re never given a good reason why it took so long for the canucklehead to figure out she was gone.

Structurally, each episode has fighting, chasing, talking and cliffhangers as the quest takes Wolverine from place to place in search of Mariko. As a result, each stop along the way features different threats and weapons but by episode seven it all starts feeling the same and you just want the story to get on to something fresh. Obvious foes, such as Omega Red turns up so in addition to bullets and knives we get Adamantium versus carbonadium but again, the animation limits just how much you can enjoy it.

The English voice cast is headed up by Milo Ventimiglia (Heroes) and does a credible job as the Canadian war machine. He’s backed by a lot of veteran vocal actors but no real names other than Scott Porter as Cyclops, who guest stars in one episode as a nod to the four series being interconnected (Wolverine returned the favor in both Iron Man and Blade).

The Blade storyline is less a quest and more a battle between the Daywalker and his eternal foe Deacon Frost. The final entry in the Marvel Anime Universe, it aired July 1 through September 16, 2011. In this case, Blade happens to be in Japan when he comes across a group of vampires that is known only as Existence. Episode one is a recap of who Blade is, which was wise for its audience, and then takes us to discos and vampire hangouts and lot so of murky stuff going on. There are young women being taken, blood farms, people who want the secret of Blade’s ability to walk in the sunlight, etc. Lots of chasing, fighting, biting and staking. My problem is that none of the characters were interesting enough to make me care and my mind kept wandering while vampires did their thing.

Here, the English vocal cast is headed up by Harold Perrineau (Lost) who does a surprisingly effective job.

I continue to find it laughable the vast differences in translation between the English dubbed soundtrack and the closed captioning since the word choices for the latter alter some of the meaning and characterization.

Both discs come with brief and not terribly informative pieces on the anime project and each character’s place in that world. They’re nice to have but totally superfluous. These are affordably priced two-disc DVDs that are good if you love the characters are anime or, preferably, both.