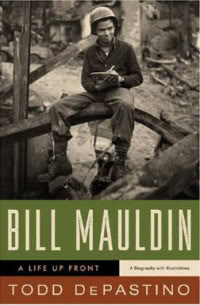 In many ways, Bill Mauldin lived out the American Dream, starting out as a physically unimposing ‘desert rat’ in the southwest, then joining the army and becoming a star soldier-cartoonist, and retiring as one of the best known editorial cartoonists in the country. He died in 2003.

In his new biography, Bill Mauldin: A Life Up Front

, author Todd DePastino takes that famous life and digs out all the strange truths, the contradictions, the unknown motivations. Mauldin was a deeply conflicted man, DePastino finds, alternatively successful and unhappy because of his deep drive for acceptance.

Born in 1921 to a rough and tumble family, Mauldin had little going for him as a child besides an aptitude for art. In his teens, he went to Chicago to study, but despite a prodigious output he had little success landing his cartoons.

With no other options (like many other enlistees), Mauldin signed up for the army and started cartooning for a service newsletter. From the start, his work focused on the lives of the grunts, who trudged through mud and faced the disrespect of superiors.

Using Mauldin’s writings, interviews and those cartoons, DePastino follows the young, driven man as he developed as a person and illustrator. And, soon enough, followed him over the Atlantic into the hell of World War II.

Mauldin managed to secure a spot cartooning for Stars &amp; Stripes, which made him safer than most “dog faces.” But he still ventured to the front lines in Italy and elsewhere, fastidiously documenting the war from a grunt’s perspective. He even nearly died during a mortar attack, earning a Purple Star Heart.

“The war became very real to me… I really sobered up and started realizing there were some things bigger than me and my ambitions,” Mauldin wrote. From that point, he focused his patch of ink on a sort of crusade for soldiers using the famed characters Willie and Joe.

The book fleshes out these episodes in great detail, viewing the great war from Mauldin’s perspective. His blemished take on things angered many, including General George S. Patton, who tried to kill the cartoon.

While Mauldin has become posthumously remembered largely for his wartime work, DePastino wisely brings out the post-war period of Mauldin’s life. During that period, Maulding faced anguish both personal and professional, losing his marriage and inspiration for his cartoons.

He dabbled in Hollywood and in books, to mixed results. His ambition remained, though he’d accomplished much, but without the driving force of the war Mauldin was aimless, like so many veterans. This began a period of reinvention, as he looked around the United States and found constant ugliness, new crusades to fight.

So closely does the book follow Mauldin in these journeys that the reader can come to know him. And at the same time, DePastino leaves an element of mystery as to why Mauldin remained such a hard, introverted man, despite earning all the love and respect and awards he could ever want. It was “the Rosebud question,” as one of Mauldin’s sons noted.

Both for the history of cartooning and the history of this country, A Life Up Front is a vitally important work, a lively look at a true American character who constantly challenged the status quo and pushed for equal rights and peace.