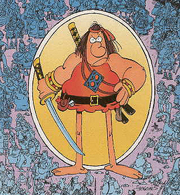 Let’s see… we need a couple of sure-fire topics of humor. How about… child labor exploitation and the deadly thievery of Big Pharmaceutical makers? I’ll bet you’re giggling just thinking about that stuff.

These are two of the topics covered in the [[[Groo 25th Anniversary Special]]] released by Dark Horse last week, and as one of America’s pre-eminent creator-owned series it deserves serious recognition for its success. But when it comes to Groo, it’s so damned hard to be serious.

So, suffice it for us to shout a big Happy Anniversary to the intrepid bumbler, his dog Rufferto, and his chroniclers Sergio and Mark. It’s quite an achievement.

If you haven’t checked out the Groo 25th Anniversary Special, just go out and read a newspaper. Then you’ll really need Groo.