Review: ‘The Shadow: Behind the Mask’ 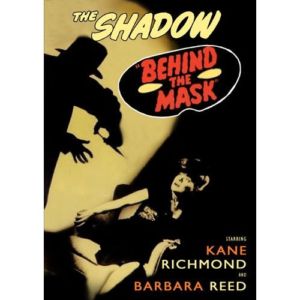 You have to appreciate the efforts from MGM and Warner Bros., trolling through their film libraries and resurrecting titles that only a handful of videophiles might be interested in owning. After transferring these to disc, they are made available as manufactured to order, largely available only through websites. Warner has over 1000 such videos available in every genre imaginable while MGM is catching up quickly.  Among the recent releases is one curiosity worth noting for ComicMix readers.

While we are all familiar with Conde Naste’s The Shadow, few beyond Anthony Tollin may recall that there were three really low budget features produced in 1946 from Monogram, all starring Kane Richmond. The second of the trio, Behind the Mask, is now out and if you’re a big fan of the character, you might want to check this one out.

The stories are watered down crime adventures; missing the spark Walter Gibson (writing as Maxwell Grant) brought to the pulp magazine that debuted in 1931 and was still coming out twice-a-month but running out of steam by this point. Visually, the gun-toting vigilante wears a full black face mask rather than the red scarf covering the lower half of his face. The slouch hat and cloak are present along with familiar figures for the magazines and popular radio series.

The fairly pedestrian story, from Arthur Hoerl (Reefer Madness) and George Kallahan involves the murder of Daily Bulletin reporter Jeff Mann with people thinking it’s the Shadow when it’s actually an impostor, the Silhouette. While this is happening, Lamont Cranston is about to marry Margo Lane (Barbara Reed), something that was never going to happen. Oddly, despite being his confidante and agent for countless missions, she now wants him to hang up his .45s simply because they are to be married, as if his cause has become superfluous. Others from the mythos include Shrevvy (George Chandler), the faithful chauffeur.

The mystery is predictable but we take our time getting to the obvious, with comedic asides that do nothing to make the characters appealing or counterpoint the story. Richmond handles the comedic elements far better than he does portraying the cold, cruel crime fighter. The film was handled with a by-the-numbers approach by director Phil Karlson, who apparently never thought to make the low budget work in his favor with camera angles and lighting to create some sense of mood, the same mood so easily created on radio. Trust me, the earlier movie serials were better. As for the other two Monogram films, The Shadow Returns and The Missing Lady, last time I looked, both were available for instant streaming on Netflix.