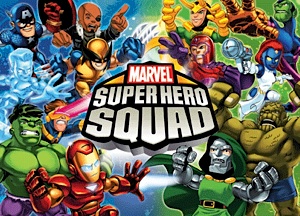 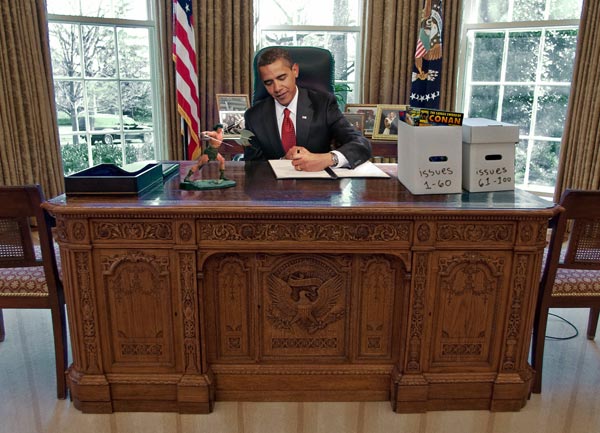 Stop worrying about Super Bowl and let’s deal with more pressing issues like why is LOST looking backwards? Elizabeth Mitchell (Juliet) and Michael Emerson (Ben) give us their perspective. MAD Magazine is slowing down (and Mike Gold isn’t happy) – but on the bright side, TORCHWOOD hits NYCon and today we get music from WATCHMEN

PRESS THE BUTTON and you’ll Get The Point!

John Barrowman told the British press that season three of Torchwood, the five-part "Children of the Earth", was being slightly toned down out of concern for its American viewers.

"The next series is about Torchwood fighting the government rather than just aliens and is a lot darker,” Barrowman said. “Jack has to make a decision no parent – that’s a big hint — should have to make.

"We’re not swearing or doing anything close to the bone because it’s been a huge success in the US and the networks won’t accept it with all that stuff in it."

The actor, known for dropping trou at a moment’s notice, reassured listeners that "I’ll still be getting naked and it will still be saucy – but it’s done with taste. We’ll doing everything so it doesn’t have to be heavily edited for the US."

Barrowman added, "I love playing Captain Jack and if I could play him until I’m 90, I would. But I’d rather do a series of 10 or 13 episodes because it’s a lot of work for just five.”

Director Euros Lyn told Torchwood Magazine that the series’ move to BBC1 will not alter the content or tone of the Doctor Who spinoff.

"We certainly haven’t neutered or sanitized it in any way. We want appeal to a bigger audience than ever, but it’s not been turned into a Children’s BBC show to achieve that. The key thing for Season 3 is that, no matter how dark it gets, we still want to keep the warmth Doctor Who has in abundance," he said.

The shortened third season will be a mere five parts but run on consecutive nights, telling a single story entitled “Children of the Earth.”

"Also, the love story between Captain Jack and Ianto continues to unfold, as does the story of married life for Gwen and Rhys, as Rhys’ character comes into play a lot more, and he becomes almost the fourth member of the team, largely by accident. It’s hard to have perspective on it when you’re right in the middle of filming, so I think I’ll just say it’s going to be brilliant.

"I think they’ve all done a great job in giving each episode a very distinct tone, and each one can stand on its own. Episode 1 is about the team becoming suddenly fragmented, and Episode 2 is much more of a spy thriller as they go their separate ways. Episode 3 introduces the alien threat in a big way, and Episode 4 is a huge political drama about the wider repercussions.

"Those are all very different story beats, and very important in their own right. Episode five, of course, has everything, and is a race to save humanity, but then, what did you expect?"

British airdate or American BBC America dates have yet to be announced although the former is expected in the spring.

Torchwood Magazine has the first scoop on the newest members joining season three of the popular spinoff from Doctor Who. The five-episode serial, Children of the Earth, has been shooting since late August with a 2009 airdate to be announced,

Producer Peter Bennett walked readers through the four starting with Lucy Cohu (Cape Wrath) who will play Alice, "a woman keeping many secrets from the past".

Susan Brown (The Riff Raff Element) will be Bridget Spears – "a character vitally connected to the government, which plays an important part in this story".

First-time performers complete the cast: Cush Jumbo as Lois Habiba, "a secretary who hacks into some vital information", and Rik Makarem, playing Doctor Rupesh Patanjali, a "junior doctor at St Helen’s hospital who gets drawn into Torchwood’s investigations".

Doctor Who in Review: Season Four, Episode #12 – “The Stolen Earth”

Every week, I’ll do my best to go through the most recent episode with a fine-tooth comb (or whatever the “sonic screwdriver” equivalent might be) and call out the highlights, low points, continuity checks and storyline hints I can find to keep in mind for future episodes. I’ll post the review each Monday, so you have ample time to check out the episode once it airs each Friday at 9 PM EST on Sci-Fi Channel before I spoil anything.

Missed a week? Check out the “Doctor Who in Review” archive or check out any of the past editions of this column via the links at the end of this article.

END_OF_DOCUMENT_TOKEN_TO_BE_REPLACED 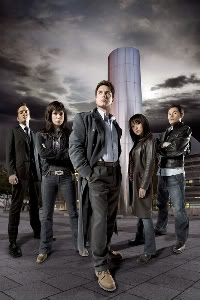 I just got an e-mail from ComicMix‘s Chris Ullrich, who was sitting in on a panel at Comic-Con regarding the TV show Torchwood.

Chris has an update on the show that’s sure to be happy news for fans of Torchwood.

I’m at the torchwood panel and they just announced season three was picked up by BBC America. Deal was done today.

As always, stay tuned to ComicMix for news from San Diego.

New Images of Davros’ Return to ‘Doctor Who’

A new pair of images making the rounds online would seem to add some color to recent reports confirming the return of Doctor Who villain Davros to the hit science-fiction television series.

While many Who fans had already guessed that the creator of the Daleks would be making a return (citing the final moments of this Doctor Who Season Four preview as evidence), newcomers should know that the the classic villain’s return is a big, big deal in the Doctor Who universe. It’s a big enough deal, in fact, that the threat is worthy of bringing back Torchwood

The Telegraph recently reported that Davros will make his return in the final two episodes of the season, and be played by Shakespearian actor Julian Bleach.

But, ummmm… what’s up with that red Dalek?

Now that he’s no longer Prime Minister of England, Tony Blair just might be up for a part in Doctor Who. At least, that’s what producer / writer Russell T. Davies hopes.

The London Daily Express reports the Doctor Who producers are trying to obtain Mr. Blair’s services for a fourth-season guest shot or cameo. The former Prime Minister, who previously had appeared on The Simpsons, does have a new job and might not be available: he’s the Middle East peace envoy for "The Quartet," a Led Zepplin-like supergroup consisting of the United States, the European Union, the United Nations and Russia. But that job probably has a lot of down-time.

This could be a good career move for the former PM. After all, thus far the new Who has begat no less than three spin-off shows; four, if you count the animated series. If Blair agrees to appear in Doctor Who (perhaps as a Cyberman), might George W. Bush be called upon to drop by Torchwood?