Doctor Who in Review: Season Four, Episode #12 – “The Stolen Earth”

Every week, I’ll do my best to go through the most recent episode with a fine-tooth comb (or whatever the “sonic screwdriver” equivalent might be) and call out the highlights, low points, continuity checks and storyline hints I can find to keep in mind for future episodes. I’ll post the review each Monday, so you have ample time to check out the episode once it airs each Friday at 9 PM EST on Sci-Fi Channel before I spoil anything.

Missed a week? Check out the “Doctor Who in Review” archive or check out any of the past editions of this column via the links at the end of this article.

IN BRIEF: Fearing the worst, Donna Noble and The Doctor head to Earth to see what last episode’s ill omens might portend. A short time later, the Earth up and disappears — and we’re treated to a peek at how the cataclysmic event rocks the worlds of various characters from Doctor Who and the series’ spin-offs, Torchwood and The Sarah Jane Adventures. The Daleks have returned with some help from the missing Dalek Caan, who sacrificed his sanity to travel back in time and rescue Davros, the creator of the Daleks. The Doctor and Donna travel to The Shadow Proclamation and discover that the missing planets, when aligned properly, form a massive machine. They follow the path of the missing bees to the Medusa Cascade, only to lose the trail. Former Prime Minister Harriet Jones makes a surprise appearance, unites The Doctor’s former companions and comes up with a plan to contact The Doctor. The plan is successful, but Harriet Jones is killed by the Daleks. The Doctor arrives on Earth and reunites with Rose Tyler, only to catch a glancing — but fatal — shot from a Dalek. The gang makes it to the TARDIS just in time for The Doctor to announce that he’s regenerating, and… “TO BE CONTINUED.”

THE GANG’S ALL HERE: I have to hand it to the [[[Doctor Who]]] crew for starting the episode off with a pretty impressive “bang” — even if Rose Tyler’s “tough girl” scene  with the gun didn’t seem to fit the character. The series of scenes that brought each of the Who spinoffs ([[[Torchwood]]] and [[[The Sarah Jane Adventures]]]) into the story didn’t seem forced or jarring, which was a real possibility given the dramatically different tone of each series. I enjoyed Sarah Jane’s reference to this difference between the teams, saying that she and her kids-savvy adventures stay out of touch with Torchwood because they have “too many guns.”

CRISIS ON INFINITE CROSSOVERS: Okay, so I’m willing to bet I’m not the only person who, upon seeing Earth’s skies filled with far-too-close planets, thought this was probably what the skies looked like at certain points during the last few “Crisis” events in the DC Universe. Of course, after having this thought, it then occurred to me how ridiculous it would have been if the explanation for all of the planets in the sky ended up having something to do with Davros punching (literally) a hole in reality.

QUESTIONS ANSWERED: Well, it looks like we know where all of those planets disappeared to. And what the Shadow Proclamation is. And why all the bees buzzed off. (Sorry about that last one.) And 85 percent of the other lingering questions this season… Way to save it up for the finale!

QUESTIONS UNANSWERED: Let’s see… What are we missing? The mystery of The Doctor’s name is still, well… a mystery. And though we saw the Medusa Cascade, we still don’t know what connection it has to The Doctor’s name, so there’s that, too.

CREATURE REPORT: What more can we say about the Daleks? Davros, on the other hand, remains as creepy today as he did several decades ago when he first appeared on the series. 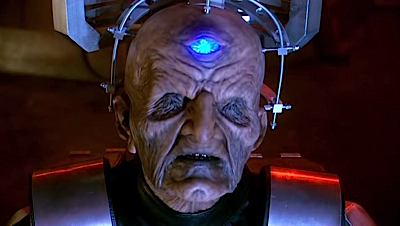 SETTING IT TO 11: Apparently, in a world where alien attacks occur with some regularity, I guess it makes sense to have a more varied spectrum of alerts for the various military and government agencies, but “Ultimate Red Alert?” Really? That sounds a bit too much like “Double Secret Probation” for my tastes.

WILF THE WONDERFUL: Friday’s episode pretty much makes it official, folks — Donna’s grandfather, Wilf, is my favorite character this season. His blink-and-you-miss-it part in the last Christmas Special, “The Voyage of the Damned,” was decent, but it was his presence in the season premiere, “Partners in Crime,” that first sold me on the possibility that there might be some advantages to former companion Martha Jones’ departure. Every time Wilf makes an appearance, it’s always a better episode because of it. Sure, Captain Jack Harkness has legions of devoted fans, but Wilf is my hero.

THERE’S NOTHING LIKE A GOOD CLIFFHANGER: And with the ending of this episode, I’m reminded of how much love I have for a good cliffhanger — and how I occasionally hate them with the fire of 1000 suns. The end of this episode has me feeling the same way I felt when writer Brian K. Vaughan left me hanging on the last page of each issue of [[[Y: The Last Man]]]. 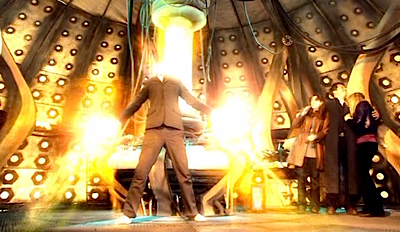 READER REPORT: Mike Weber had the following to say in the comments for last week’s Doctor Who in Review, pointing out an interesting parallel between the popular Season 3 episode “Blink” and another work of literature:

An interesting point re-reading P.C.Hodgell’s wonderful high fantasies featuring a very unuausal – make that Very Unusual – heroine named Jameth, i hit Bones, a 1984 short story sandwiched in the middle of an omnibus edition of the first two books ([[[Godstalk]]] and [[[Dark of the Moon]]], collected under the title [[[Dark of the Gods]]] by Atlanta’s own, lamented Meisha Merlin Press). It contains the following Very Interesting passage (Jame, who is an apprentice thief at this point, and he Master are cornered by the animated skeleton of a master architect, who wants his head back. uezal is the architect’s pet gargoyle, serving his skeleton as a head, and “vhors” are ratlike creatures; the ones in this story are also skeletal):

“Another fit of coughing seized Jame. When her eyes cleared again, the vhors and theirmaster were withn five feet of her. So that was it: Like Quezal, they could only move when unobserved. If she so much as blinked now, she was finished.”

FIRST IMPRESSIONS OF THE NEXT EPISODE, “Journey’s End”: The Doctor is regenerating… or is he?

Thanks to the good people at The Doctor Who Wiki for information related to several of this week’s story notes.

Screencaps courtesy of SciFi.com. For more on Doctor Who and other great programs, check out Scifi.com and the BBC.

Want to know what you’ve been missing? Check out all of the past “Doctor Who in Review” features via the following links:

Season Four, Episode #7 – “The Unicorn and the Wasp”

Rick Marshall was Online Managing Editor for ComicMix before joining MTV's SplashPage. Previously, he was Online Content Manager for Wizard Entertainment. He has written for several daily newspapers, alternative weekly newspapers, trade magazines and online media, and was named "Writer of the Year" by the New York Press Association in 2005.