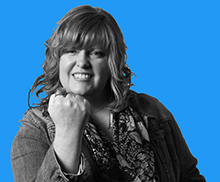 One of the joys of having returned to the comics convention scene this fall was seeing old friends and industry comrades again after too many goddamn years – Walter and Louise Simonson, Marv Wolfman, Fabian Nicieza, Timothy Truman, Jim Salicrup, Dave Gibbons, Cat Staggs, and Jill Thompson, to name just a few – and to have a chance, at last, to meet, face-to-face for the very first time, a woman whom I’ve wanted to meet for a very long time, a woman of immense talent and of immense class…

The first time Gail and I communicated it was through Facebook, by which she reached out to me to apologize for all the press she was getting about her assignment to write Wonder Woman, i.e., “Wonder Woman Gets First Female Writer” and so forth, and that she wanted me to know that she kept trying to correct the press.

I said something like this: “But, Gail, if they print that, if they call you the second ongoing Wonder Woman writer, there’s no story.” 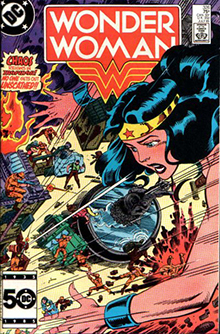 Of course, Gail went on to write one of the best ever run of the Amazon’s adventures.

Anyway, that led to Gail asking me to participate in her “Five Questions with…” site. Check it out. I just reread it – it’s one hell of an interview!

Gail and I continued to communicate via social media, but we still remained only “Facebook friends” until…

At this year’s NYCC, knowing Gail was there, I walked up and down the aisles until I finally found her booth. She was off at a panel, but I was determined to make time to at last meet one-on-one. So at timely intervals I kept walking over to her table – it was about the fourth time that I knew that she was back because the crowd and line around it snaked up and down the aisle. I stood off a little bit watching her talk to fans and sign her work until there was a (very) momentary break – I slid in, with apologies to the fans at the front of the line (“Just want to say hello for a quick second”) – and felt like a complete idiot. I finally had a chance to meet Gail, and I was tongue-tied.

It felt like an eternity; but it was probably a maximum of three seconds, until I said, “Hi, Gail, it’s Mindy Newell.” (Like I was on the phone or something.) I think I stuck out my hand for a shake and said, “It’s so nice to finally meet you.”

She just stared at me. I thought I had done something wrong, so I think I said, “Well, I don’t want to hold anybody up,” and left. 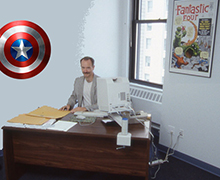 Then, yesterday, I found this on my Facebook page:

It was lovely to meet the legendary Mindy Newell briefly at my table at NYCC. 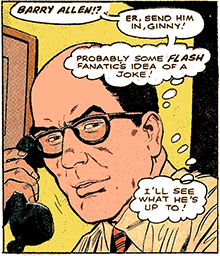 (something I get routinely, but incorrectly, credited as being).

She’s a huge inspiration and a lovely person, and when she came to meet me at my table I was too overwhelmed to do much more than just gasp out a hello.

But she’s a legend and I adore her!

Honestly, guys, the last thing I think of myself as is “legendary.” Legends in the comic books industry, to me, are people like Stan Lee, or Jack Kirby, or Steve Ditko. Or Neil Gaiman, or Marv Wolfman. Or George Pérez, or Alan Moore, or Karen Berger. (And yes, you, too, Mike Gold, as I kiss up to my editor here at ComicMix *smile*.) To me, it is absolutely incredible that I even know these people. Or worked with some of them. Or can call so many of them, and others, friends. Or that I knew and worked with Julie Schwartz, whom my daughter still remembers giving her pink sucking candies from the jar on his file cabinet in his office. Or Len Wein, who actually invited me to a poker game where sat around the table people who had only been names on a splash page before. Or Mark Gruenwald, who always made me laugh and actually hired me to work at Marvel.

I’ll tell you a secret.

Sometimes I feel like a fake. A fool. An illusionist.

That’s not what legends say.

That would be Gail Simone.