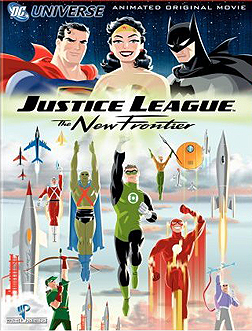 Like many of you out there, a bad taste was left in my mouth coming off of Superman: Doomsday

, so of course I was wary of DC’s next direct-to-DVD flick. I wasn’t a huge fan of the graphic novels (Isn’t that what we call thick comic books these days?), but I am certainly a fan of the [[[Justice League]]] and its animated counterpart.
I’ll start with a warning to those who aren’t totally familiar with The New Frontier

and its universe, but ARE fans of the established animated DC universe: this is a whole new direction from shows like Justice League Unlimited

and others, but it is full of exciting DCU fan favorites. In fact, my biggest complaint about [[[Superman: Doomsday]]] was that there were no outside DC heroes, even though they were all over the original story. But I digress.
Looking at the animation first, I was very pleased that Bruce Timm (main creator of the animated DCU) and Darwyn Cooke (wirter/artist of The New Frontier graphic novel) were able to find a happy medium between the already established look of the animated Justice League and the very stylized look of Cooke’s art, thought I do think the eye-slits works much better for Superman than the baby blues. The entire artistic feel practically beamed with that golden age look, which is what attracted me to the books in the first place.

I had difficulty with the voice talent here – not as much as Doomsday – but this movie was held directly up to the light against the Justice League cartoon, which I feel has some of the best voice casting for a superhero franchise. I mean with names like James Remar, Oded Fehr, and Gina Torres as Hawkman, Dr. Fate, and Vixen respectively, how can you really top that? Former [[[Angel]]] star David Boreanez pulled off Hal Jordan without question. Same goes for Neal Patrick Harris as Flash and even Miguel Ferrer as Martian Manhunter. Lucy Lawless as Wonder Woman should have been a no-brainer from the get go, but I did, however, have an issue with our World’s Finest. 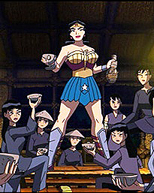 I realize that this story wasn’t really about Batman and Superman, and there wasn’t as much focus on them as characters like Lantern and Manhunter, but I was hoping for something a little stronger from the casting here. I think that being the characters that they are and the voices that preceded, especially that of Kevin Conroy who voiced Batman for nearly a decade and a half, or even Tim Daly, who voiced Superman for almost five years. Both Twin Peaks

) have excellent voices, but I was not sold in the least as having them voice this power duo.
Finally, in looking into the comparison to the book, I found the film next to flawless visually. There were a few great plot points that were left out due to time constraints – Ted (Wildcat) Grant’s last fight and just about everything with the Suicide Squad. As a whole, the film stays very true to the book, keeping the nostalgic feel that permeated the graphic novel.
As a whole, I’m wishing that all of DC’s direct-to-DVD films will be as good as this, but I sadly don’t think that will be the case. But I’ll take the good that I’ve got and happily give this flick an 8/10.

[[[Justice League: The New Frontier]]] will be on DVD, Blue-Ray and HD-DVD in the general stores on February 26th and in participating comic book shops shortly thereafter.