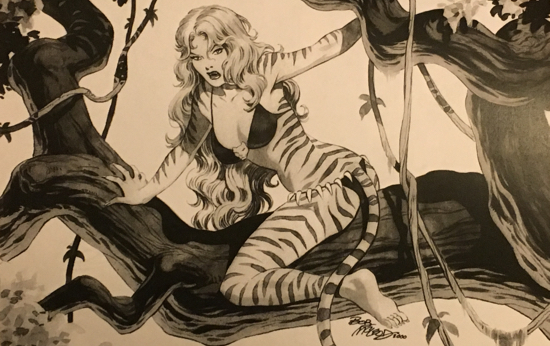 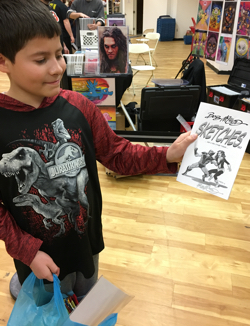 We live in a time when each day we are both blessed and cursed by instant feedback and judgment on everything we do. We’re hammered by harsh evaluations of our work and even our future-plans. Professional sports are dissected during postgame broadcasts and call-in shows. Feedback based on casting details or plot rumors now begins long before any creative project is released. In the comic industry, fans render judgments based on teased details long before anyone reads a single page.

Businesses are encouraged to hear and respond to every complaint and critique from customers. Hey, even I have led a seminar at ComicsPRO where the central theme was that retailers should “Grow Big Ears.”

But there are times when you have to ignore the voices. Sometimes you just know what has to be done and have to do it.

Exhibit #A is Joey Gates. Joey is a local Finger Lakes NY area guy who loves comics and has been to numerous comics conventions, as both as a fan and a dealer. 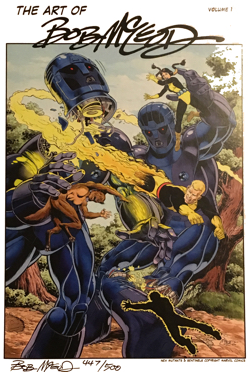 Joey had a dream of starting a new comic convention. Oh, there were about a zillion reasons why he shouldn’t have launched the Finger Lakes Comic-Con in Auburn last month. Seasoned pros would tell him why the timing was off and why it would never work.

But he did it. And now he will have always done it. And yes, there’s plenty of learning for Joey. I’m excited that he’s already incorporating this learning into his 2018 plans. The point is: if he had listened to the naysayers his dream of launching a comic convention would have never happened and he would never have had gotten to the point where he could learn – ostensibly ‘the hard way’ – and improved the next year. A tip of the Captain’s hat to Joey.

Exhibit #B comes right out of Joey’s Finger Lakes Comic-Con. One of the guests was comics artist Bob McLeod. He’s the type of guy who’s created and illustrated so many things I love – the Dark Knight Over Metropolis story and subsequent Superman adventures, the franchise expanding X-Men spinoff, New Mutants, with the wonderful Louise Simonson and Rough Stuff magazine – a fantastic comics magazine for artists and for everyone who loves comic art.

I conspired with my lovely wife Kathe and longtime Action-team member John Cresco to kidnap Bob after the first night of the show. We took him to Auburn’s award-winning craft brewery, Prison City Pub. (C’mon and visit, I’ll take you there too!). 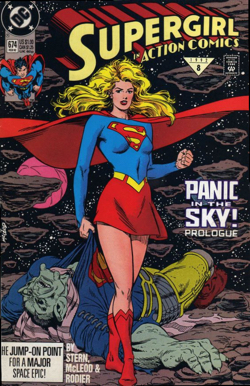 The whole night was a lot of fun, but upon reflection, the best part was when Bob told us his own Secret Origin story.

Bob was one of those kids who always loved art and got really good really quickly. As a MAD Magazine fan, his plan was to follow in the footsteps of Mort Drucker and Jack Davis, but thought that working in traditional comics would be just fine too.

So after art school, Bob sold his car, went to NYC and started to make the rounds at the various comics publishers.

At DC Comics he met Joe Orlando. Now, among the giants in the industry, Joe Orlando was a giant among giants. Not only was a Joe a phenomenal artist, but also he had a strong understanding of the business side and knew how it all worked. If Joe told you something about the industry, you would know it to be true.

He told Bob, “You put a lot of work into these samples, but you need to go back to school and learn how to draw.” Most comic fans would have been devastated with feedback like that

Instead of sinking into a depression, Bob took the time to learn. He was broke and could only afford to buy a couple of comics. He looked to compare what he was doing and what they were doing. He copied and dissected the panels. He took the time to understand Joe’s POV and how he could fulfill the need so he’d be ready the next time he got up to bat. 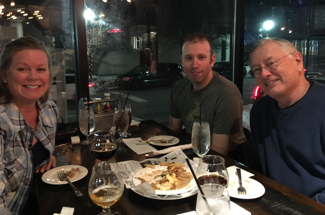 Neal Adams is a guy I’ll be talking about more soon, but he figures into this story as well. The comics world knows about Neal’s great art skill and about Neal’s efforts on behalf of creator’s rights. Sometimes, however, the small things reveal our character too.

While this was all going on, Bob had met with Neal Adams. The legendary comics artist called John Verpoorten, Marvel’s head of production, and asked if they needed another staffer. Voila – a career was born.

Had Bob McLeod listened to Joe Orlando that day, he wouldn’t have persevered and become a rock-solid comic artist.

There was an inspirational Internet meme floating around that said something to the effect of, “Sometimes a dream is something that only you can hear.” I respect those dreams. I get inspired by people who chase those dreams, and –sometimes – don’t listen.