Mike Gold: Where’s Our Next Buck Coming From? 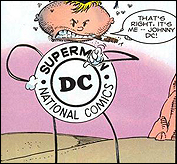 There was a time when if you were reading comics as an adult, it was generally assumed you were too stupid to understand real literature. Many of us wouldn’t read comics in public venues for this very reason.

Not me; I couldn’t care less. When it first came out, I even read Hustler Magazine on Chicago’s vaunted “L” trains. But many of my friends felt that way, and that’s why Phil Seuling’s early New York Comicons were so liberating. In the late 1960s there would be less than one thousand of us talking to one another in an elegant Manhattan hotel ballroom, and each and every one of us were awestruck by the fact that there were so many of us.

As we became the first generation since Fredric Wertham torched the medium to get into the business, we used this feeling of isolation from society to promote the level of storytelling. Comics became more character-driven and less Pow! Biff! Bam!. Before long adult fans would be able to point to a more mature level of story and art. We believed our medium was becoming sophisticated.

In retrospect, I take issue with that. We’re telling stories about people with ludicrous abilities who dress up in fantastic, gaudy costumes to either commit or fight crime and/or evil (to borrow from Dick Orkin’s Chickenman). There’s a limit to that “sophisticated” brand that we were too proud to notice.

Popular culture works like a snowball atop a mountain: by the time you hit ground level, that snowball has grown to a boulder the size of Colorado. Grim and gritty – a term I came up with to help sell GrimJack ­­– became dark and disgusting. Heroes became as ugly on the inside as the villains were on the outside. We evolved to excess.

Before long the American comic book medium, still overwhelmed by heroic fantasy, had driven out all the stories that work for the younger audience while limiting the older audience to a steady diet of redundancy. It is possible to create a story that works for 12 year-olds (and their precocious younger siblings) as well as for 24 year-olds, 36 year-olds, and even 61 year-olds. Off the top of bald pate, I can think of a few writers who did just that, and did so brilliantly: Steve Englehart, Marv Wolfman, Len Wein, Steve Gerber, Louise Simonson, Archie Goodwin, and our own Denny O’Neil… to, indeed, name but a very few.

All too-many comic book store owners became the villains of their own childhood: “Hey, kid, this ain’t a library!” Driven by admonitions from certain of the larger comics distributors in the 1980s, kids were perceived as not having enough money to be worthwhile customers. They took too much time making their purchases. They didn’t know what they wanted. They couldn’t engage in a conversation about who stole what from whom when it came to The X-Men and The Doom Patrol.

Kids were shooed out of comic book shops, and publishers – again, at the insistence of certain comics distributors – pulled away from producing comics that were marketed towards the younger audience. Instead we started cranking out a steady diet of R-rated superhero comics, many of which were quite good and worthy of publication. But they became the snowball that ate the comic book shops.

I always thought this was a mistake, and I thought so for one simple reason: if you chase away today’s 12 year-olds, who’s going to be your customer or reader in five or ten years?

Today, we have a small fraction of the number of brick-and-mortar comic book shops we had just one generation ago. Go figure.

But, today, it appears we’re beginning to see some drift towards retro-expansion. More on this next week.