Mindy Newell: Have A Coke And A Snark 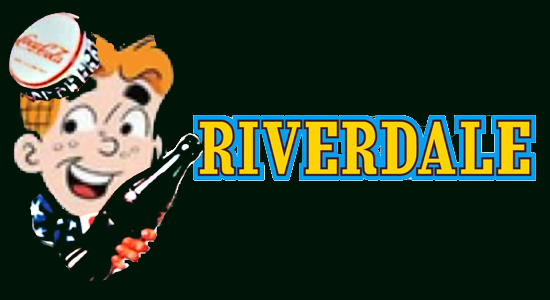 I watched the second episode of Riverdale mainly because there wasn’t anything else on that interested me, and secondly because I wanted to give it another chance. I admit to having a negative disposition towards the show – the premiere, if you recall, elicited an unenthusiastic response from me. So let me start with what I liked…

Nope. Sorry. Aside from the twisting of an American icon into something dark and twisted – hey, did Zack Snyder have anything to do with the production? – small things just kept aggravating me. Like Archie’s hair bothers me. Hey, for 76 years (the first appearance of Archie, Betty, and Veronica was in Pep Comics, cover-dated December 1941) the guy has been a true “carrot-top,” his coloring closer to Damien Lewis (Homeland, Billions), but Mr. Apa’s hair – and I grant you, the kid has some terrific head of hair on him – is a dark chestnut, as if a henna rinse was applied to his brunette locks… and not all of it took.

Am I being silly? Yeah, perhaps. After all, the original Barry Allen, a.k.a., the Flash, has blonde hair and blue eyes, and Grant Gustin, who plays him on TV, has light brown hair and eyes. But Mr. Gustin and his supporting characters are so well written, the show is so engaging, that holding fast and true to their comic book driver license pictures and ID’s becomes secondary to the viewer – at least this viewer.

And although Lili Reinhart and Camilla Mendes do honor the looks of their four-color progenitors (Betty Cooper and Veronica Lodge, respectively), I’m not feeling them. In my mind, I keep substituting Kristen Bell and Charisma Carpenter (as they were back in the day on those other teenagers-in-high-school-hell) for Ms. Reinhart and Ms. Mendes. This is not to impugn the talent of either of the later two; there just hasn’t been any there yet to separate them from any other starlet.

As for Case Cott’s Kevin Keller – can he do anything else besides drool over some other male character? Sheesh, how one-dimensional can you get? Okay, we get it, he’s gay. Jesus, enough already with the tokenism. (Tell us how you really feel, Mindy.)

The only character I find intriguing at all is Forsyth Pendleton Jones, a.k.a. Jughead, which is ironic, because he has always been the least interesting character to me in the comics. Played by Cole Sprouse, Jughead is the guy just standing off from the center of activity, the one who marches to the beat of a different drum, the neo-beatnik, the observer. He’s the type girls’ parents really warn them about (as opposed to Betty’s mother cautioning her about Archie). Im-not-so-ho, if the show is to succeed, it needs to hitch its wagon to Jughead Jones.

Right now, the Super Bowl pregame show is on. I am really, really, really rootin’ for the Atlanta Falcons, if only to wipe that smug smile off of Tom Brady. I know the guy is one of the best quarterbacks to ever play the game, but there’s always been something about him that irks me, and always has. And it doesn’t have anything to do with Deflate-gate, or even Brady’s support of Il Trumpci. (Yeah, “Make America Great Again,” you poor, poor multi-millionaire.) So, Go, Falcons!!!

Great commercial on right now with “Oh, My!” George Takei. (I think it was for Pizza Hut.) The other commercial I want to see is the Stranger Things Season 2 teaser trailer.

There’s another premiere following tonight’s game. I read the New York Times review, and here’s piece of it, by Neil Genzlinger:

“Until the Trump presidency became a reality, the main order of business in any review of  24: Legacy would have been to assess whether the franchise is still viable without Jack Bauer, Kiefer Sutherland’s memorable counterterrorism operative, as its lead character. Now, though, and especially given the events of the past week, it’s the show’s chosen villains, not its hero, who demand attention.

“That’s because a good number of them speak in foreign accents, and some embody President Trump’s bogyman of the moment, the radical Muslim terrorist.

“The premiere was filmed back when it seemed unlikely that Mr. Trump would be elected – it was screened in New York on November 7 – but the opening moments play as if they were scripted to support the immigration restrictions he imposed last week. The series grows considerably more layered as it goes along, with the panoply of villains encompassing a variety of demographics, yet the choice of a bin Laden surrogate as the starting point is sure to reignite the debate over the demonization of Muslims that “24” has encountered before.”

And Coca-Cola just had a beautiful commercial – men, women, and children of different ethnicities, religions, and colors singing America the Beautiful.

Have a Coke on me.