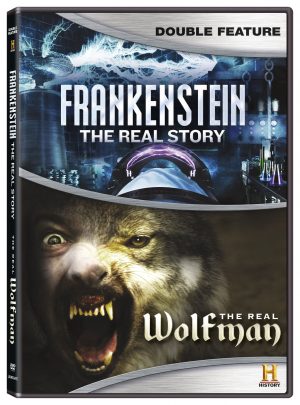 The History Channel has occasionally explored the roots of the monsters that thrilled and chilled our childhood and Lionsgate Home Entertainment has dutifully released them on disc every now and then. Coming Tuesday is a nice little double feature package collecting the previously released Frankenstein: The Real Story and The Real Wolfman on a single standard DVD for the bargain price of $12.98.

While overwrought and overly dramatic with some cheesy music and effects, both creations are worth a look if only because it gives us a chance to look at things in context.

We begin with three pieces exploring Frankenstein and his monster. Mary Wollstonecraft Shelley’s novel, as many know, was written as a result of a ghost story contest among her literary peers. What the In Search of the Real Frankenstein does is explore the quickly evolving world of science in the early nineteenth century. Scientists had used electricity to animate animal limbs and others tried shocking humans as well. And while touring Europe with Percy Shelley, she is likely to have heard about Konrad Dippel, who conducted unsavory experiments in the real Frankenstein castle. All of which acts are prelude to the second piece, Frankenstein, which is more biographical about Shelley herself. Her scandalous affair with Percy, who left his pregnant wife to tour with her, and life after his death are nicely covered along with the novel itself, which first appeared without her byline. She finally affixed her name to it five years later for the second edition.

The final piece is It’s Alive! The True Story of Frankenstein, narrated by Roger Moore (one wonders why he was chosen). Here, the many stage and screen adaptations of her work, are examined and I am pleased the Hammer films get their due so the focus isn’t just on Universal’s output. There are nice interviews with Mel Brooks, Gene Wilder, special effects wizard Rick Baker, film historian David Skal, Sara Karloff, Kenneth Branagh, and, Peter Bogdanovich. While the most familiar of the three, it is satisfying.

What most fans may be less aware of is covered in The Real Wolfman, a 90-minute exploration of the thing called Gevaudan that is credited with killing 100 people in France at the end of the eighteenth century. Similar to Ghost Hunters, the film features George Deucher, a retired policeman and criminal profiler, and Ken Gerhard, a crypto-zoologist as they journey to France in search of the truth behind the legend. They come off as somewhat clueless and at times erratic as they interview historians and descendants of the people who were there during the attacks. Most interesting is the story of Jean Chastel, credited with ending the threat, possibly using silver bullets he made and then had blessed by a priest. Some coverage is devoted to the history of werewolves, which puts Gevaudan into perspective. The reenactments are nicely done and add a quality touch to the production.

This disc is a representation of the previous releases and appears in 1.33:1 standard ratio with Dolby digital 2 channel audio. As a result, everything is perfectly acceptable for home viewing.

There are no extras presented with this fun double-feature.