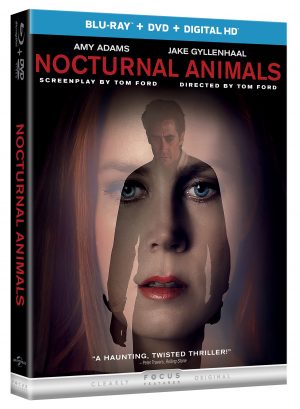 Universal City, California, January 23, 2017 – Exploring the thin lines between love and cruelty, and revenge and redemption, Academy Award® nominees Amy Adams and Jake Gyllenhaal star as a divorced couple discovering dark truths about each other and themselves in Nocturnal Animals, coming to Digital HD on February 7, 2017, and Blu-ray™, DVD and On Demand on February 21, 2017, from Universal Pictures Home Entertainment. Also starring Aaron Taylor-Johnson (Avengers: Age of Ultron) in his Golden Globe® Award-winning role, Nocturnal Animals on Blu-ray™ and DVD comes with an exclusive behind-the-scenes featurette about the making of the film including an inside look with writer/director Tom Ford.

In the haunting romantic thriller of shocking intimacy and gripping tension from acclaimed writer/director Tom Ford (A Single Man), Susan (Amy Adams) is in an unfulfilling second marriage when she receives a package containing a manuscript from her ex-husband, Edward (Jake Gyllenhaal). Moved by Edward’s writing, Susan cannot help but reminisce over the most private moments from her own love story with the author. Trying to look within herself and beyond the glossy surface of the life and career that she has made, Susan increasingly interprets the book as a tale of revenge, a tale that forces her to re-evaluate the choices that she has made, and re-awakens a love that she feared was lost – as the story builds to a reckoning that will define both the novel’s hero and her own. Nominated for 9 BAFTA® Award (Britain’s Oscars equivalent) including Best Director and Best Actor, Nocturnal Animals is the winner of the Grand Jury Prize at the 2016 Venice International Film Festival, and of the 2017 Golden Globe® Award for Best Supporting Actor (Aaron Taylor-Johnson).

Based upon the Novel: Tony and Susan by Austin Wright