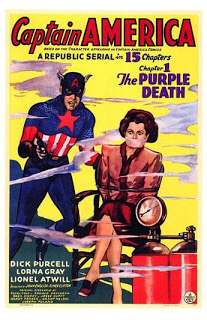 Millions, including your humble narrator, await the opening of the new CAPTAIN feature film, one that promises to bring the character back to his Simon and Kirby roots. But old Cap has a troubled history with that has this writer shuddering at the thought of a return to the bad old days of horrific Captain films.

Captain first hit the big screen as a 1944 Republic Pictures serial and has the distinction of being that studio’s last superhero film. But the studio that created such incredible hero serials as THE ADVENTURES OF CAPTAIN MARVEL, a film renown for some of the best stunts in history, and the spectacular cliffhangers of SPY SMASHER, seriously dropped the ball on this film. To call this film a disaster for all Captain fans is a mild statement, this serial is just painful.

Let’s start with some basics about Captain , the very basis of the character. Every fan knows Captain is Steve Rogers, a weakling turned into the perfect man through the legendary super-soldier formula. Throughout World War Two he fought evil Nazis in the frontline of battle, dressed in star spangled chain mail and carrying a red, white and blue shield. Sounds like an easy setup for a film shot during WWII, right? 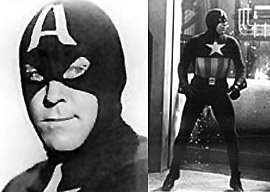 Not so for Republic Pictures! No, suddenly Captain is District Attorney Grant Gardner who fights crime with his fists and a pistol. Steve Rogers does not exist in this world and this hero is an unimpressive type who appeared slightly overweight. This was not a mere perception of a disgruntled fan, the actor who played the part, Dick Purcell, died of a heart attack prior to release. The cause of death being the stunts weas too much of a strain on the poor miscast actor’s heart. And yes, Cap’s signature weapon is replaced by a pistol. Oh and his costume was transformed from chain mail to cloth with the signature eagle wings on his mask also removed. Any connection to the Captain America created by Joe Simon and Jack Kirby appears accidental by the time this film in completed.
The villain of the piece was legendary Universal Films horror star, Lionel Atwill as a villain called The Scarab. Atwill adds an eerie menace to the role and was considered one of the bright lights in this production.

The reason for these bizarre changes to the character was, in the opinion of writer/film historian Don Glut, this film was originally a script meant as a sequel to THE MYSTERIOUS DOCTOR SATAN. That famed serial had a hero named Copperhead who did use a pistol and fought crime. This appears to be as good an explanation as any about this terrible serial, though it did keep Cap from appearing in any feature films until an unauthorized appearance in a Turkish action film called 3 DEV ADAM. Should you wish a truly bizarre film experience, view this one…one hint, the villain is a potbellied Spider-Man with huge green eyebrows who regenerates himself once being killed…poor Cap…
Share