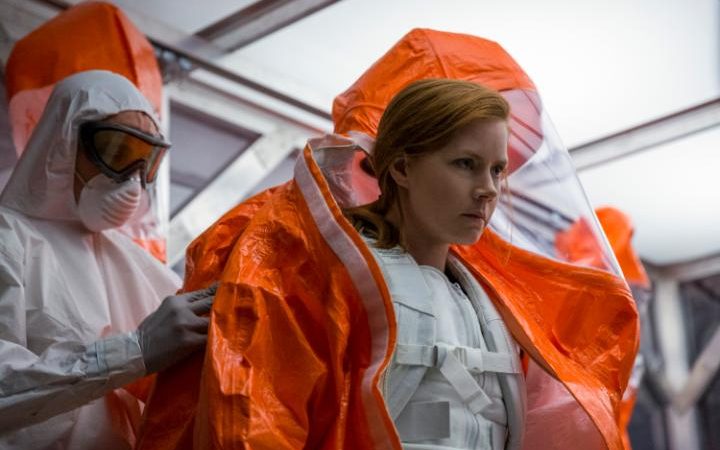 I went in to the theater knowing less about what Arrival was and what it was about than any movie in recent memory. I had skimmed the first few sentences of the Wikipedia page but only knew the absolute broadest strokes. I was beyond pleasantly surprised; I can’t recall being so enthralled by a movie that was so far off my radar since Drive. Arrival is the best kind of science fiction that provides us with some fantastic things and concepts, but what it really tells is a mundane story through a fresh lens fantastically well.

Arrival has the kind of plot that sounds boring in summary— a linguistics professor is called to translate the language of a visiting alien— but ends up working well. The movie got me thinking about linguistics and the intricacies of language more than I have since I decided not to take an introductory level class in the subject back in college. There’s an inherent tension involved in any alien encounter, and something about the way the score does string hits that kind of sound like the way the aliens talk gives even the safest moments a hint of looming doom. There’s this overlay of global tension, that other countries might attack their local aliens and that this will spark a war for some reason, but none of that ever feels terribly compelling. I care about the characters they’re making me care about; I don’t care about vague threats that never make much sense.

There’s a turn in the story— I don’t want to call it a twist; there’s a massive shift in perspective in the third act. I usually don’t care about spoilers but I won’t give this away because I appreciated that I came in to Arrival with very little idea what the movie was about. The third act is brilliant, it’s clever, it’s suitably science-fiction-y, and it puts the whole film in to sharper focus. (This might be getting too close to what it is but I’ll never pass up a chance to give Zack Snyder grief: Arrival makes Watchmen look terrible.)

There aren’t enough good things to say about Amy Adams and the job she does here. She nails the big moments like being afraid of the aliens the first time she meets them and the big moments of grief and sadness, but the bigger moments seem easy. The small moments are what set the whole film apart. There’s a moment where she struggles with her hazmat suit the first time she has it on, the weight and the cumbersome nature seem to be smothering her and it communicates how awkward and massive that moment must have felt in a way that slack-jawed awe never would. There’s this need to lace so many touching moments with a sense of bittersweet inevitability in retrospect and it’s there, and it’s heartbreaking, and it’s beautiful. Forest Whitaker is excellent and Jeremy Renner does some of the best work I’ve ever seen from him, but Amy Adams is special in this film.

Arrival is an incredible science fiction film. Easily the best entry in the genre since Ex Machina although they’re nothing alike so there’s very little basis for comparison. With six weeks of allegedly top notch movies still to come, Arrival is comfortably on top of my list for best film of the year. It’s a haunting film that commands attention when on the screen, but more importantly infests your thoughts for days after.