Win a Copy of Game of Thrones: The Complete Sixth Season 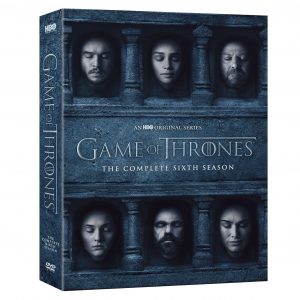 You won’t be returning to Westeros for new adventures until summer 2017 but our friends at HBO are offering up a copy of the forthcoming Game of Thrones: The Complete Sixth Season. In order to win the prize, you need to tell us which of the many lands or Houses you would most want to live in and why.

Entries must be posted no later than 11:59 p.m. November 20. The contest is open to United States and Canadian readers only. The decision of ComicMix‘s judges will be final.

Blu-ray™ with Digital Copy – includes all DVD features plus:

The most-watched series in HBO history and a worldwide TV phenomenon, Game of Thrones returns with another power season. This year, after the shocking developments at the end of Season 5 – including Jon Snow’s bloody fate at the hands of Castle Black mutineers, Daenerys’ near-demise at the fighting pits of Meereen, and Cersei’s public humiliation in the streets of King’s Landing – survivors from all parts of Westeros and Essos regroup to press forward, inexorably, towards their uncertain individual fates. Familiar faces will forge new alliances to bolster their strategic chances at survival, while new characters will emerge to challenge the balance of power in the east, west, north and south.