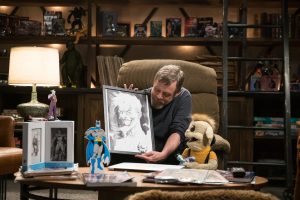 The force will be strong on devices across the nation today as Mark Hamill’s Pop Culture Quest comes to Comic–Con HQ. Mark Hamill has been collecting comic books, original artwork, toys and other mementos since the early 1970s and now he gets to share his passion and enthusiasm for collecting in his new web series.

“I’ve been a collector all my life,” said Hamill. “This show is a natural outgrowth of that passion. Now I have an opportunity to collect other people’s collections! I can’t wait to see what’s out there and share it with the world. Collectibles are a living history of who and what we are, so we just might learn something…but there’s no doubt we’re going to have fun!”

This series kicks off at the DC Comics headquarters with the legendary Jim Lee, as the co-publisher and Mark trade favors and end up with their very own pieces of pop culture history. Join Mark throughout the season as Mark Hamill’s Pop Culture Quest uncovers comic book memorabilia, film props, Godzilla, pinball machines and beyond with special guests including monster amasser Scott Zilllner, famous collector Bob Burns and many more!

Hamill will once again team with his friend and Star Wars: Episode VI – Return of the Jedi producer Howard Kazanjian.  Kazanjian was Executive Producer on Raiders of the Lost Ark and served as VP at Lucasfilm during the dramatic expansion of the company in the 1980s. Producer Darren Moorman, whose film Same Kind of Different as Me will be released next year, and longtime collector and vintage show promoter Scott Kinney will round out the producing team as Executive Producers on the series.

San Diego Comic-Con is only once a year, but Comic-Con HQ is year-round! The new subscription video – on – demand destination is available at Comic-ConHQ.com via web browsers, iOS/Android devices, Roku, AppleTV and Amazon Channels, with more to come.

To celebrate, the first episode is available to fans worldwide via DC Comics. In the pilot episode, “Joker’s Favor,” Mark Hamill heads to DC Comics Headquarters, home to one of the greatest collections of comic book memorabilia and one of the most celebrated artists in the world, Jim Lee. Join them as they share their stories of pop culture collecting and trade favors to end up with their very own pieces of pop culture history.

With Mark Hamill as your guide, explore the most exclusive pop culture collections in the world! Join Mark on his weekly quest to track down the rumored rocket-firing Boba Fett, the original Time Machine, the last surviving armature model used to animate the original 1933 King Kong, the 1992 Batmobile, and so much more! Mark travels inside pop culture’s vaults to uncover why we are so fascinated with collecting and what our passions say about us

Tune in next week on Comic-Con HQ as Mark’s affinity for Godzilla and giant robots leads him to collector Scott Zillner, whose passion transcended his home – filled with thousands of monsters and robots – and led to the creation of Power Morphicon!