John Ostrander: Listing To One Side 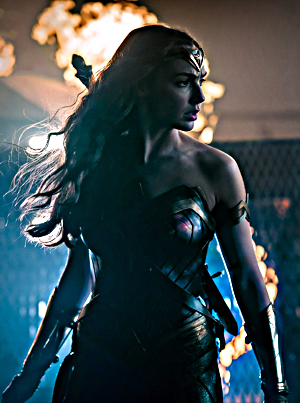 We all know that Geek Culture has taken over our American civilization. Young’uns may not realize there was a time when the Geek was looked down on and sneered at and frequently beaten up for their lunch money… which is embarrassing when you’re 24. Now, superheroes have taken over the movie box office and can be found in one version or another all over television.

Further proof: the current issue of Entertainment Weekly not only has Benedict Cumberbatch on the cover as Doctor Strange, the majority of the double-sized issue is taken up with a listing of the Fifty Most Powerful Superheroes. How much more geeky can you get? The very quintessence of geekdom is arguing about which superhero icon is better.

EW set up a rating system and asked staffers to rank the superheroes accordingly. The nine categories were Cultural Impact, Bankability, Design, Modern relevance, Mythology, Nemesis, Originality, Personality, and Powers. They could get up to ten points in each category except for Cultural Impact which was worth up to 20. Total: 100 Pts. The emphasis, I think, was weighted towards superheroes who have appeared in movies; witness bankability. Given it’s EW, that makes sense; they, like the movies, are trying to appeal to the broadest audience.

Their #1 is Wonder Woman. This might surprise more hard-core comic geeks. Given the rise of the awareness of women and Gal Gadot’s appearance as Diana in Batman V Superman, perhaps not so surprising and not unwarranted. 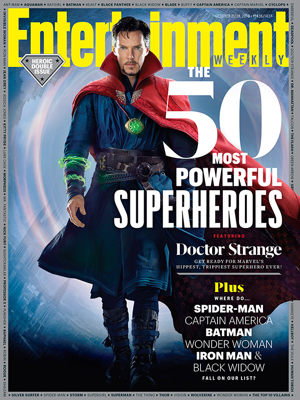 #2 for EW was Spider-Man, followed by Batman and Superman with Wolverine rounding out their top 5.

For myself, I would have made Superman at the top of the list by virtue of the fact that none of the others exist without him. Superman was the first and set the standard – the colorful costume, the secret identity, the larger than life exploits – every hero or heroine that followed used that template is some fashion. Bankability? It was the huge financial success of the Last Survivor of Krypton that spurred the other publishers (not to mention Superman’s publisher) to get more of the same out there on the newsstands.

Look, I know that there were other superhero types before Supes or around the same time such as the Phantom and the Spirit or, over in the pulps, the Shadow. In comics, however, it was Superman who set the standard. In feature-length movies as well; the first Superman movie debuted in 1978. The first Batman film followed more than a decade later. As good as they are, none of the other superheroes has had the same cultural impact as the Man of Steel.

Don’t get me wrong; I’d also place Wonder Woman high up on the list. I think Batman is my #2 but WW would never be lower than #3. Spider-Man? Yeah, he’s important enough to be #4 but I think I would make Iron Man my #5 given the fact that the film launched the Marvel Cinema Universe, sometimes known as the Might Marvel Money Making Juggernaut. Iron Man and Robert Downey Jr are its cornerstone; if it had flopped (and some thought it would), it would have been tough to make the others… fly.

But that’s what makes this issue of EW so geeky. Listing the heroes according to some criteria is at the very heart of geek culture. Since every list is subjective, there is no one list that is right and final and definitive, no matter how much some geeks might insist that their own list is all that. I know my list isn’t the final word on the subject; it’s just my opinion. Your mileage may vary.

The very fact that EW’s list exists, that they devoted so much time and space and attention to what is essentially a very geeky enterprise, shows that Geekdom has conquered the world.

So – who is stronger? The Hulk or The Thing?