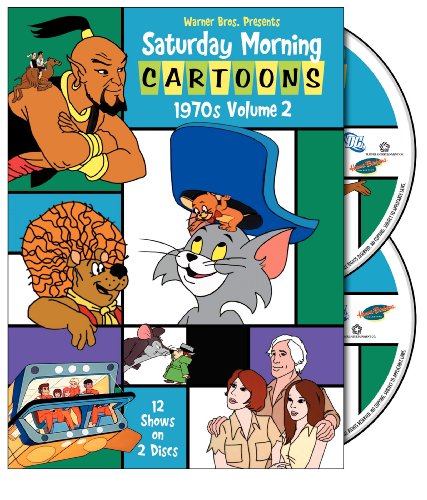 The 1970s remained a good time to be a kid, as the three networks continued to program Saturday mornings with hours and hours of programming aimed right at them. On the other hand, it was clear that finding new series to click with the evolving kiddie set was harder and harder so series seemed to come and go at a faster clip with shows from earlier years revived to fill gaps or revamped to bring the familiar to new audiences.

While super-heroes were largely done, magic, fantasy, and real adventure found their niches with series starting to be aimed at the younger set earlier and slightly more mature offerings as the hour grew later. All told, the dozen shows represented in Saturday Morning Cartoons: 1960s

, out tomorrow from Warner Home Video, are snapshot into the decade.

For that younger set, there is [[[Help! It’s the Hair Bear Bunch]]], which ran from 1971-1974, and featured three fairly stupid bears – Hair, Square, and Bubi – who escaped the Wonderland Zoo each episode, had an adventure and wound up back behind bars.

For those weaned on the reruns of the CBS sitcom, [[[The New Adventures of Gilligan]]] continued following the castaways, with most of the actors reprising their voices and a hideous laugh track for what was rather unfunny fare. It was just one of many prime time sitcoms to make the transition – none successfully other than [[[Star Trek]]].

Older fans were offered [[[Sealab 2020]]], a solid episode of which is here, showing that attempts were being made to bring in real world themes, plus attempts at characterization and serious stories.

Included here is [[[Shazzan]]], which is an oddity considering it originated in the 1967-1968 season and was never rerun in the 1970s. Two siblings find halves of a magic ring, which summoned a genie named Shazzan when put together. They were taken to a fantasy world with the hopes of finding their way home but had adventures along the way, getting rescued at least twice a story by the magical being. The two-disc set’s sole extra is [[[The Power of Shazzan]]] as a number of folk look back at the show, marveling at Alex Toth’s strong design and ridiculing the state of writing in the 1970s.

Another show that debuted in 1968 and was gone by 1970 and is therefore in the wrong set is the atrocious [[[Banana Splits Adventure Hour]]]. Inspired by NBC’s [[[Rowan & Martin’s Laugh-In]]], four guys in costumes, designed by Sid and Marty Kroft (who got better when left to their own devices) performed short bursts of slapstick humor accompanied by two music videos that owed something to the Monkees. Interspersed throughout were three adventure shows. Two were animated: [[[Arabian Knights]]] and [[[The Three Musketeers]]] and we get their debut stories in this inaugural show. Both were standard cookie cutter H-B fare, largely unmemorable and gone after a season. The third was [[[Danger Island]]], attempting to turn [[[Jonny Quest]]] into a live-action show that was largely dubbed and poorly performed. Of note here is that the “hunk” was young Jan-Michael Vincent, well before [[[Airwolf]]].  What is astonishing given how bad the humor and the drama are is the fact that the entire first season was directed by Richard Donner. Yes, that Richard Donner.

Better was the two season show, [[[Valley of the Dinosaurs]]] that saw the Butler family accidentally lost in this time-frozen world accessed from the Amazon River. While seeking a way home, they were befriended by Gorak and his family. The mixed families formed the spine of the show as they struggled to learn from one another and survive dinosaur attacks.

Less memorable is [[[Inch High, Private Eye]]], which brings the bumbling secret agent to animation in the form of the diminutive detective, aided by his attractive niece, Lori, and the dim-witted would-be detective Gator (imagine Jethro Clampett). The episode included was entirely forgettable and unamusing.

Studios were increasingly having their hands bound by parents groups and network regulators who didn’t want the viewers adversely affected by the violence they saw while eating their cereal. Much of the conflict was reduced or removed, with the writing suffering greatly for this as witnessed by the witless Hair Bear Bunch or the edits made to Road Runner reruns. Even when Captain Marvel arrived in the live action [[[Shazam]]]! (sadly missing from this set), he could barely touch the bad guys let alone duke it out with them.

Clearly, the Golden Age for Saturday morning had passed and quality fare for children would have to wait for the advent of cable television and the plethora of channels able to cater to their needs with verve and imagination.