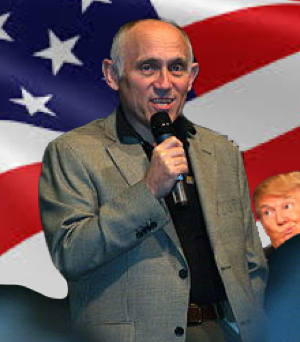 Fifty years and one month ago, a new TV show came to the airwaves that was unlike anything ever really seen before – science fiction, but not childish stories of space cadets with their zap guns, only different from shoot-em-up westerns because they shot beams of light instead of bullets of lead. Star Trek was something different. Unique. And incredibly long lived. Star Trek has become part of the American story, with the original model of the U.S.S. Enterprise hanging in the Milestones of Flight section of the Smithsonian National Air and Space Museum, right next to the Spirit of St. Louis.

David Gerrold, author of the episode “The Trouble With Tribbles”, recently wrote,

And today, half a century later, despite the dated production values, Star Trek‘s best stories are still strong statements that the future will exist with humans in it, and will be what we make it.

But it’s not easy living up to that standard of a golden future. It requires commitment to an ethos of inclusion, that the stars are not just for rich guys, or white guys, or guy guys – we’re all going to go there. All of us, in our infinite diversity and infinite combinations, boldly going forward.

It requires a commitment to science – all science, not just the stuff that reinforces what you already believe. Why guess when you can learn? When you can know?

It requires a commitment to education – not only learning new things, but letting go off old lessons learned that we cling to because of nostalgia and superstition instead of accuracy.

It requires a commitment to competence. There are times when someone’s got to take the wheel— shouldn’t it be the best driver available? Shouldn’t it at least be someone who’s driven before?

And most of all, it requires a commitment to finding a way to work together instead of against each other. We aren’t going to go anywhere if people keep tossing sand into the machinery.

To a lot of the people who work on the franchise, including at various times me and ComicMix contributors Robert Greenberger, David Mack, Peter David and others, Star Trek is more than mere entertainment— it’s a message of hope, and we make contributions to a secular mythology where we are the gods and demigods who span the heavens.

And there has never been a presidential candidate who stands in such complete opposition to the ideals of the Star Trek universe as Donald John Trump.

That’s why over 130 members (and counting) of the cast, crew, and contributors to the Star Trek universe, including myself, have added their names to a voter mobilization movement called Trek Against Trump, an effort spearheaded by Armin Shimerman – and if the most famous Ferengi in the universe tells you that Trump is a greedy, manipulative, tasteless boor who doesn’t have the brains to run a banana stand, believe him.

There are some who have objected to the group’s explicit call not to vote for third-party candidates, and I say— get over it. The only way Donald Trump is not going to be elected is if Hillary Clinton is. You don’t like “voting for the lesser of two evils”? Then realize you’re voting against the greater of two evils. The needs of the many outweigh the needs of the few, or the one. You might have heard that somewhere.

So: register to vote. And if you’re really passionate about it, here is your five week mission– to explore strange new neighborhoods. To seek out 18 and older lifeforms to build civilization. To boldly vote, like you’ve never voted before.

Because if you don’t– Melakon wins.