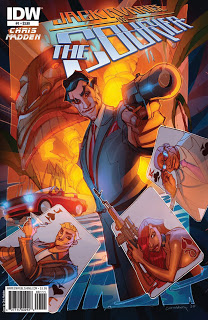 San Diego, CA (September 20, 2011) — IDW Publishing is thrilled to introduce JACK AVARICE IS THE COURIER, an exciting, month-long, weekly comic series for the five-Wednesday month of November. Created, written, drawn, and lettered by rising star Chris Madden, the artist on the upcoming Danger Girl: Revolver series, this special five-part series is timed specifically to release one issue a week for each Wednesday of the month.

“When Chris Madden first presented JACK AVARICE IS THE COURIER to me, I was absolutely floored,” said editor Tom Waltz. “I mean, the guy is writing, drawing, coloring AND lettering the series—and doing it at top-notch levels on all accounts! It’s a great comic book story filled with exciting and entertaining characters and distinctly fun artwork. Madden is the real deal and I’m so happy IDW gets the chance to show off his diverse talents to the world!”

This explosive miniseries tells the story of Jack Avarice, a down-on-his-luck kid who dreams of a life like the movies. His world is about to change when he’s recruited by the secretive agency called Courier and is dumped head-first into the world of international spying. Each issue will take Jack on an exhilarating new adventure, where he’ll discover that the reality of spycraft is far deadlier than any movie he could imagine. Spies, voodoo magic, deadly beauties, high-caliber thrills, and high-octane destruction, JACK AVARICE IS has it all.THE COURIER 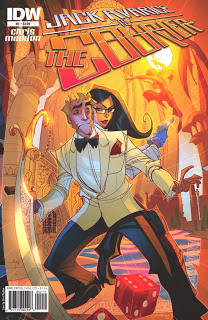 “I can’t wait for Jack Avarice to hit stands,” creator Madden said. “And I couldn’t be happier releasing it through IDW—it’s a perfect match!”

To kick off this great comic event, IDW is offering a special 5% discount on the entire series. Plus, readers are encouraged to contact their local retailers about the special variant Madden sketch cover.

IS THE COURIER #2 ($3.99, 32 pages, full color) will be available in stores on November 9, 2011. Diamond order code: SEPT11 0255.
Be careful what you ask for—it might get you! Jack Avarice has just been dumped head-first into the world of international spying, and he’s about to find out if he can swim! Recruited by the secretive Courier agency, it quickly becomes apparent to Jack that his life might not be quite as it seems. But before he can digest this revelation, he’s off on his first harrowing mission with a gorgeous new partner, and a deadly new mission—unravel the mystery of the Eyes of Fate… before they can unleash their horror upon the world!

Visit IDWPublishing.com to learn more about the company and its top-selling books.

About IDW Publishing:::::
IDW is an award-winning publisher of comic books, graphic novels and trade paperbacks, based in San Diego, California. Renowned for its diverse catalog of licensed and independent titles, IDW publishes some of the most successful and popular titles in the industry, including: Hasbro’s The Transformers and G.I. JOE, Paramount’s Star Trek; HBO’s True Blood; the BBC’s DOCTOR WHO; Toho’s Godzilla; Sony’s Ghostbusters; and comics and trade collections based on novels by worldwide bestselling author, James Patterson. IDW is also home to the Library of American Comics imprint, which publishes classic comic reprints; Yoe! Books, a partnership with Yoe! Studio; and is the print publisher for EA Comics.

IDW’s original horror series, 30 Days of Night, was launched as a major motion picture in October 2007 by Sony Pictures and was the #1 film in its first week of release. More information about the company can be found at http://www.idwpublishing.com/.THE COURIER #5
JACK AVARICE THE COURIER #4
JACK AVARICE Spies, explosions, voodoo magic, deadly beauties, high-caliber thrills, and high-octane destruction… action-adventure has a brand-new name, and it’s JACK AVARICE! The world of spies and intrigue is very much real and lies hidden just below the surface. But when a down-on-his-luck kid who dreams of a life like the movies meets the world’s greatest secret agent, he’ll discover the reality of spycraft is far deadlier and more explosive than any movie he could imagine—and he now has a starring role! The explosive five-issue miniseries starts here!