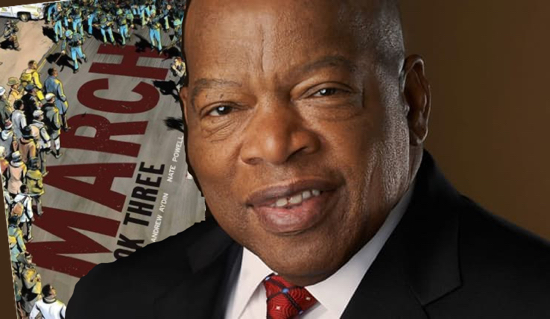 Hallelujah! Over the weekend, I had a revelation.

March, by John Lewis, Andrew Aydin and Nate Powell, is the answer to every question, the solution to every problem.

Let me explain how I came to see the light.

I was at a conference for American Jews interested in increasing the opportunities for a shared society among Jewish and Arab Israelis. In attendance were representatives from various American Jewish funding organizations as well as Israeli Jewish and Arab leaders. It was heady stuff for me, and I was thrilled to see that Israeli Arabs are just as opinionated (and enjoy a good argument) as much as I do.

All of us being Semites, of course we wanted to eat. A lot. Over meals, we didn’t just discuss policy and programs. We talked about current events (oy) and our various jobs and interests. When I said I worked in comics and was writing a graphic novel, I got asked a lot of questions.

Some people hadn’t read a comic book since they were children four decades ago (or more). Some had read Maus, but didn’t know about anything else.

When I mentioned that they might enjoy March and told them that Congressman John Lewis had written this three-volume graphic novel, almost everyone was interested.

On this site, because we write about comics all the time, we know about John Lewis. And because we are rabid consumers of comics and books and movies and television, we know a lot about how comics influence our larger entertainment choices. We know that comics supply the creative content for a bunch of mega-billion dollar industries.

We know less about how comics can save the world. Specifically, March.

The third volume was published recently, and while I loved the first two, this final piece knocked me on my ass. It’s so good and so powerful and so subtle. I thought I knew the story about the March on Selma and the struggle for civil rights in the 1960s. I’d watched it on television in real time. I’ve talked to people who were there. I’ve read other accounts.

I’m a person who frequently enjoys movie violence. March 3 viscerally demonstrated the difference between fact and fiction. I felt actual pain reading about the mobs of white people who beat people demonstrating for their rights as citizens. I also felt pain for those white people, who must have led fairly miserable lives to think that the proper response to peaceful protest is to split a person’s head.

Somehow, Lewis and Aydin and Powell convey these horrors in such a straightforward fashion that I doubt any parents will object to their children reading the books for school.

An Arab woman who is principal of an Arab middle school in the Western Galilee told me her students very much admire Dr. Martin Luther King. She said they recognize that his fight is their fight. If/when there is an Arabic edition, I’m going to donate a bunch of copies to her library.

Let’s hope those kids are just as successful using King’s tactics as he was when they attempt to achieve their goals. And, because I’m greedy, let’s hope they create books that are just as wonderful.