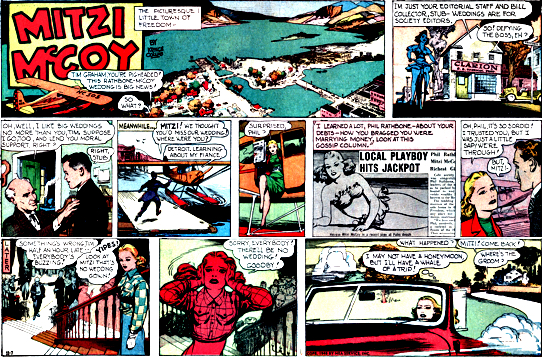 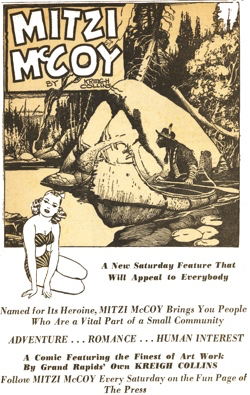 What’s more delightful than a summer fling? You meet someone new, get fascinated and before long you’re spending every moment under the hot summer sun together. This summer’s almost over, but there’s still time for one last fling. Get ready to meet Mitzi McCoy…and her creator’s grandson, Brian Collins.

Mitzi McCoy was a lovely strip that debuted in the late forties. Created by illustrator Kreigh Collins, the series opens in the small midwestern town of Freedom, where readers meet the strong willed heiress Mitzi McCoy.

In her first adventure, she summons her resolve to tell her obnoxious fiancée to “get lost.” Mitzi had discovered her fiancée was burdened with debt, and to make matters worse, he had bragged to a gossip columnist that he was “marrying money.” On top of all that, the scoundrel also included a photo of Mitzi in a bikini to accompany the story. Having learned a tough lesson, Mitzi throws herself, and her local newspaper chums, into a series of small town adventures.

The strip is visually stunning. Through the lens of 2016, Kreigh Collin’s artwork is like a lovechild of early Frank Frazetta mixed with a whimsical dash of Dave Stevens. Mitzi McCoy reminds me a lot of Frazetta’s comic strip Johnny Comet, recently collected and published by Vanguard. Each panel is solid, tight and imaginative with expressive figures, gorgeous design and engaging settings. 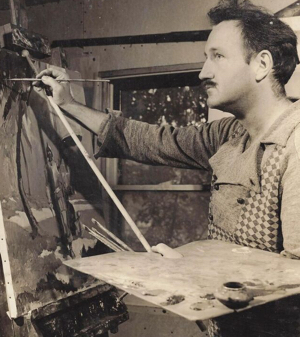 Mitzi and her pals would face off against counterfeiters, art forgers and blackmailers amongst the rolling hills of small town America. As the quintessential “girl next door”, Mitzi offered many opportunities for Kreigh Collins to show off his art skills with demure glamour shots.

But as just as quickly as she came onto the scene, Mitzi was whisked away.

It would be fair to assume Hal Foster’s classic Prince Valiant inspired this new strip. In fact, Kreigh complained to his editor at the NEA syndicate how unfair it was that Foster was able to run Prince Valiant as a full-page strip, when Kevin the Bold was cut to a half page. He compared his concern to boxing with Hal Foster, but with Foster secretly punching with an iron bar in his boxing glove.

In the last years of his career Kreigh would change the strip once more. It became Up Anchor, a nautical strip about a family on a boat. It mirrored his own time living on a schooner with his wife and two youngest children. 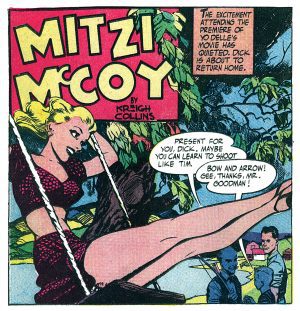 Kreigh’s family took his illustration work in stride. It seems that the family didn’t consider his newspaper strips that big a deal, although Kreigh did enjoy a certain amount of local celebrity. After his passing, Kreigh’s studio had drifted into a state of disrepair. Kreigh’s widow donated many of the strips, proofs and original artwork to others.

But one day graphic designer Brian Collins, Kreigh’s grandson, fell hard for Mitzi McCoy. He didn’t know much about his grandfather’s career or the comic strips he created but he was intrigued when he starting seeing a few of the strips.

It turns out Brian’s father and grandfather weren’t very close. So growing up there wasn’t that much interaction. But Brian had caught the bug and wanted to learn more. As a self-confessed collector, he worked hard to acquire the old strips. He hunted down several old strip clippings from collectors and his uncle would also supply him with surviving treasures whenever they were found.

Perhaps, as a graphic designer, he shares a bit of his grandfather’s talent and appreciation for illustration and narrative adventure. 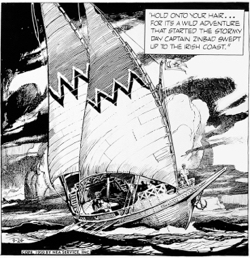 Brian has, in essence, become the champion of this grandfather’s work and legacy. He maintains the blog, Kreigh’s Comics with an outstanding collection of strip samples and commentary.

Brian’s now exploring several options to produce a collection of his grandfather’s work. Fans of Geek Culture know that there are so many wonderful and innovative new comics produced each month, but that doesn’t stop them from enjoying the incredible reprints of classic material offered by publishers like IDW, Hermes, Vanguard, Fantagraphics and Canton Street. It’s become a new Golden Age for enjoying Golden Age work.

It’s surprising Kreigh Collin’s work isn’t better known. Maybe the syndicate didn’t support it enough. Maybe the circulation wasn’t strong enough. Regardless, in these fleeting days of summer, there’s still time for you to fall in love with Mitzi McCoy.