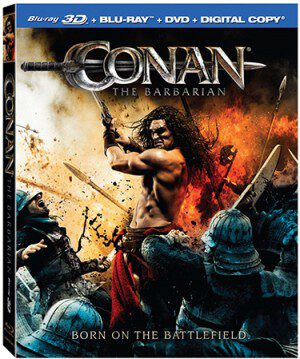 Conan the Barbarian was such a major figure in the heyday of the pulp magazines, that he made an indelible impression on readers. When Lancer Books took over the mass market paperback publishing for the Cimmerian in the 1960s, the Frank Frazetta cover images were so powerful, you had to notice. Since then, different generations have their own impression of how Robert E. Howard’s character and world should look. After Frazetta came Barry Smith and John Buscema and after them came Arnold Schwarzenegger and then…not much. The syndicated Conan featuring Ralf Möller barely made a ripple and as the rights went from owner to owner, he faded a bit from memory. Even the wonderful Dark Horse Comics adaptations have not quite made the stir the original comics did nor have the paperback originals from Tor and others had that same spark.

As a result, there was a lot riding on Lionsgate’s revival of the character and, sad to say, they failed at their task. Conan the Barbarian, which came out in August, was poorly marketed and came up short in the writing, production design, acting and directing, resulting in a worldwide box office of anemic proportions. Now, the movie is coming out this week as a Blu-ray combo pack and we get a chance to consider what went wrong.

It all starts with the writing and while the writers in the featurettes all praise Howard’s world and the adaptations that came before them, they somehow failed to tell a strong story. The entire first act is all about Conan’s coming of age, the untrained warrior learning to be a man from his father (Ron Perelman in a thankless rule). Khalar Zym (Stephen Lang), a conqueror lays waste to their village as he sought the final piece to reassemble a powerful mask that needs the blood from a special lineage to activate its power, turn him into a god and grant him he ability to resurrect his dead wife. Conan watches his be tortured and die, his village destroyed so of course he vows vengeance.

We’re told, not shown, of his exploits, referencing many of the seventeen Howard stories, implying the boy turned out to be quite accomplished man. But, when we meet the adult Conan (Jason Momoa), he’s surrounded by people led by the pirate Artus (Nonzo Anozie), the writers forgot to introduce us to. Instead, we rush headlong into a series of exploits that results in his finding Zym, just as Zym finds Tamara (Rachel Nichols). There’s a lot at stake and a lot of opportunity to add some character to deepen the action but the trio of writers and director Marcus Nispel chose not to do any of that.

Zym spends the movie trying to activate the power of the mask and once he finally accomplishes the goal, it wriggles and clasps onto his face but he seems no more powerful than before, nor does he try and resurrect his wife — it’s like they forgot all about the powerful artifact.

The Hyborean Age looks like the ragged edges of Middle Earth and the costuming looks fairly generic.  I will give Nispel props for coming up with some interesting visual bits of action I have bit seen elsewhere, such as the climactic battle between Conan and Zym.

Given the absence of a quality script, the cast, headed by Momoa, does what they can but no one shines. Each character feels by the numbers and the most unique one, Marique (Rose McGowan) needed more to do. Howard’s women were strong and exotic while Nichols looked like she came from the Mall of America and had no chemistry with the smoldering Momoa.

Sad to say, this was a misfire from start to finish, owing largely to the failure of the writers to bring Howard’s prose to the screen.  The movie looks spectacular on the screen, obviously shot for 3-D and transferred fine. The sound was also good and unremarkable (as was the score so Basil Poledorous has nothing to worry about).

To see the handful of extras, you need the combo set which has 3-D, 2-D, and Digital copy. There’s the usual audio commentary from Nispel, who shares little in the way of interesting anecdotes. Momoa and McGowan provide a separate track and their banter is far more enjoyable.

There are two fine featurettes, The Conan Legacy, eighteen minutes of the writers and producers extolling the various interpretations of Howard’s barbarian through the years. Notable though, is the total absence of the Frazetta artwork which everyone references. It’s also great to have Roy Thomas included, because it was his effort to bring Conan to comics that helped propel the character into the pop culture. Former Cinefantastique author Paul Sammon, who wrote extensively about the first feature film back in the day, is also on hand for some fine perspective. The other one, Robert E. Howard: The Man Who Would Be Conan, is a slightly shorter bio of the man and the influences that led him to write of barbarians and kings. The same people do some chatting and it’s all all-too-brief glimpse into the influential and tragic writer.

There are two other standard pieces, Battle Royal: Engineering the Action, and Staging the Fights, the latter demonstrating how the pre-visualization fights looked compared with rehearsal footage.

I had hoped for a better film, a better tribute to the iconic warrior, but in the hands of mediocre writers and a visionless director, Conan the Barbarian just did not provide the spark to propel interest in the character into the modern consciousness.