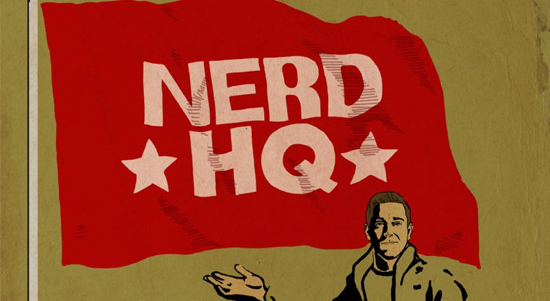 I’m all about organizations with heart. Places that make you feel at home. And while the San Diego Comic Con is phenomenal and offers many amazing experiences, it can also be overwhelming and make you feel a bit like you’re just one of many ants in the ant farm, toiling slowly along towards your next goal.

That’s why I’ve said before and I’ll say again that Nerd HQ is a great alternative place to go and get your geek on when you’re feeling a little burnt out on the crowds of SDCC. Not only that, but the fact that its creators, Zachary Levi and Dave Coleman, built it from scratch and maintain a hands-on approach to running it as it grows (among other things, Zac hosts almost every Conversation and Dave keeps things running behind the scenes); and that all proceeds go to the charity of Operation Smile, give Nerd HQ a great cozy, almost familial vibe. And, of course, it’s a plain fact (that I can confirm, having had the pleasure of interviewing him on a couple of occasions) that Zac Levi is just a really solidly nice dude with a lot of heart. And I think that intangible quality can be felt in everything he’s built.

Last year, I was a big fan of the change in venue of Nerd HQ to The New Children’s Museum. The layout and fun backdrop complemented Nerd HQ’s offerings and all of the various interactive activities they provided, as well as the Conversations for a Cause. This year, with the addition, as Dave Coleman had noted in our Nerd HQ preview interview, of e.g. risers and extra air conditioning in the panel rooms, the venue was even better; and although there were many things to see, Nerd HQ still managed not to feel overcrowded.

Some of the cool things on offer this year were:

Of course, along with all of these excellent things, one of the best parts of Nerd HQ is the Conversations – smaller panels of about 200-250 which generally feature a chat between Zac Levi and the featured guest(s). They had a slew of fantastic guests this year, and I personally got to see some really neat panels.

I’d quote some of it for you, but I don’t have to! Because along with livestreaming all of the Conversations for the people at home so they could feel like they were right there with us (very cool!) you can now watch all of them on YouTube as well; an experience I highly recommend.

And while you’re doing that, feel free to poke through my SDCC photo collection for more Nerd HQ goodness; and also check out my previous con coverage of the SDCC Her Universe Fashion Show, the Animaniacs Live! panel, the Kings of Con, American Gods, and Nick Animation.