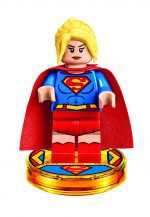 As part of year two of the popular toys-to-life game Lego Dimensions, the company has announced that Supergirl will be joining her cousin in the DC Comics cast of characters. But that announcement comes with a number of caveats.  The Supergirl minifig will only be made available with new purchases of the starter pack for the game, and only for the PS4 console.

In addition to her own kryptonian powers and abilities, Supergirl will transform into her Red Lantern form, and gain the abilities of a member of the rage-fueled army from the Green Lantern titles.

Judging from the product shot above, Supergirl has a gold base, a year two feature which will allow the character to play in an “Battle Arena” based on the figure’s adventure world.  So far, only year two figures have been shown to have that feature – this suggests that at least the DC world may have one of these  battle arenas.

UPDATED – WB Games has verified that Supergirl will NOT open up a Battle Arena option:

“only LEGO minifigures included in the wave 6 through 9 expansion packs will unlock a Battle Arena within the Free Play Adventure World of the corresponding entertainment brand.” Warner Bros. Interactive Entertainment has made no information available if there will be a later release of the figure for other players, so for now, if you’ve been playing the game since day one, the physical figure will not be available. Nor will it if you do not own a PS4 system.

This is not the first time such an exclusive offer has been made for this genre of games.  Disney Infinity made a PS4 exclusive version of Boba Fett available at launch of the Star Wars update of the game. However, they made it clear that the figure would become available later in the year for other players. And it was – shortly before the line was cancelled.

The Supergirl-exclusive PS4 starter packs will release in late September, to tie into year two of the Lego Dimensions line, which includes Sonic the Hedgehog.