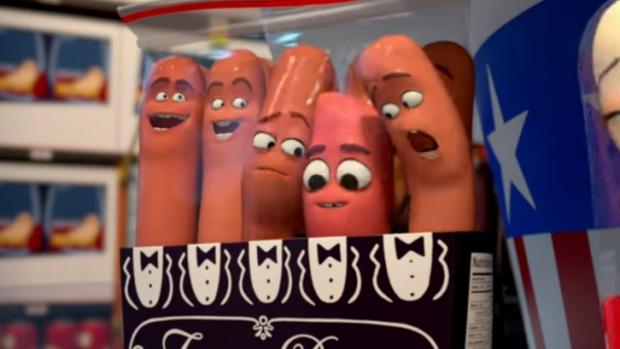 It’s a shame there’s no outlet in our current media landscape for R-rated sketches written by high profile talent. There’s Funny or Die and its ilk, I suppose, but I can’t imagine the money there is anything like it is for a feature-length film. I’m pretty sure there’s a good eight-minute sketch to be made out of Sausage Party that would be, if not quite to my taste, generally enjoyable but instead it’s this endless rehash of the same five or six jokes that seems to drag on forever and ever but only takes 90 minutes.

Maybe I’m becoming too old and stodgy to enjoy comedy anymore, but I just don’t think the idea of a hot dog and a bun having sex is funny enough to be the anchor for an entire movie. This is the joke of this movie. Not the only joke, there’s a literal douche who is also a figurative douche and the whole thing with food being alive and not knowing it’s going to be eaten, but the hot dog bun sex thing is the big one— we start with it, we end with it, it comes up amazingly often, and it isn’t really that funny. They try to spice it up in the second act by adding a lesbian taco, and let me tell you, what this movie didn’t need was a greater variety of speculative food intimacy (but it’s clearly what the producers thought it needed as the whole film concludes with a massive food orgy).

Sausage Party is, when it isn’t a hastily constructed vehicle for bad jokes, a takedown of religion. The food thinks they’re going to heaven when they’re selected by humans (called “The Gods”) because they have been tricked by a consortium of non-perishable food items that have seen the cycle play out for some time and invented the story to make the food less afraid of their impending horrible deaths. I would say that it’s the screenplay embodiment of the arrogant attitude about other people’s personal beliefs you get from taking one college-level philosophy class, but Ricky Gervais made that movie seven years ago and it was The Invention of Lying— so Sausage Party isn’t even original in being a smarmy ball of quasi-intellectual tripe.

It’s hard to get too bothered by bad representation in a movie that feels as insubstantial as Sausage Party. If a few Jewish writers want the only Jewish character in their movie to be a nebbishy Woody Allen stereotype, I don’t have any specific problem with that as a Jewish man. I’m a little less confident that the right choice was to make an equally stereotypical Arab character and have that character be voiced by David Krumholtz. Having those two characters end up screwing each other senseless in the aforementioned giant food orgy plays in to some ugly stereotypes vis a vis masculinity with regards to both communities, but I doubt this is something that went through the head of literally anyone involved so it’s more a sin of ignorance than malice. I’m slightly less willing to be charitable about the decision to have Bill Hader play both a Native American stereotype and a Mexican one in the same movie, but every moment I spend thinking about that is one less moment I get to spend never thinking about Sausage Party again.

It’s possible I’m simply too old for Sausage Party. South Park: Bigger, Longer & Uncut was one of the funniest movies I had ever seen when I was 15 years old and I was an evangelist for it among my friends. Perhaps Sausage Party is sending the same ripples through teenagers today and I’m out of touch or simply heard enough swear words in my life that reciting them as rapidly and randomly as possible doesn’t make my laugh the way it did when I was younger, but I don’t believe it. I firmly believe Sausage Party is a bad and lazy movie, but there were enough laughs in my theater to give me this slight moment of pause.