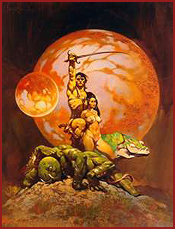 I was about 14 years old when Ballantine Books started their reprint series of Edgar Rice Burroughs’ John Carter of Mars. Being a science fiction fan, a character fiction fan, and fan who’s attracted to anything numbered sequentially, I devoured the series. I re-read the first five books about 12 years ago and I enjoyed them, albeit with a nostalgically jaundiced eye.

I was both amazed and, oddly, not surprised (they’re two different emotions) when my father told me he was a John Carter fan. He started reading them around 1928 – by then, the first book was about 16 years old. Sharing this bond was quite comforting: both John Carter, my father, and I were created in Chicago over a 38 year span.

There have been numerous comics adaptations. The first was for the newspapers and for Dell Comics, created by Burroughs’ son John Coleman Burroughs. Gold Key tried a few issues; despite Jesse Marsh’s art, they were pretty lackluster. Later on, both DC and Marvel got into the John Carter business – sequentially – and those projects attracted an amazing line-up of artists, including Murphy Anderson, Dave Cockrum, Ernie Colón, Larry Hama, Carmine Infantino, Gil Kane, Frank Miller, Walt Simonson, and Mike Vosburg. Whereas the latter Marvel issues were written by Chris Claremont and Peter Gillis, the majority of the DC/Marvel runs (by far) were penned by Marv Wolfman, and that stuff is among my favorite of his. And that says a lot. Later on, Dark Horse did some crossovers with Tarzan, and John Carter even popped up in the waning days of the classic Tarzan newspaper strip. Currently, both Dynamite Comics and Marvel are publishing the character – the latter is tied into the new movie, and the former is tied into a lawsuit.

There had been a great many attempts to bring John Carter to the screen, both large and small. If you dig around, you’ll find the legendary cartoonist Bob Clampett’s test footage and sketches – they were amazing, and I wish he was able to sell the project. I remember going to the International Licensing Show in the early part of this century and seeing a huge display for an upcoming movie adaptation – some stunning artwork, particularly in their mammoth backdrop. Sadly, none of these projects came to be. There was a movie released just a couple years ago starring Antonio Sabàto, Jr. and Traci Lords, but because I’m a nice guy who always maintains a civil tongue, I won’t mention it again.

This Friday, John Carter of Mars finally makes his big-time movie debut. Produced by Disney – not coincidentally the owner of Marvel Comics – if you haven’t seen any of the trailers, commercials or ads for the movie you just might be Stevie Wonder. For many, many reasons, I have set the bar for John Carter pretty high. My dad died six years ago, so I won’t be able to see it with him. But I notice my daughter Adriane is pretty excited about the movie, and I hope to extend the family bond to her this weekend.

By the way, this is John Carter’s 100th anniversary. If you’re planning on sneaking a cake into the theater, please, don’t light the candles.