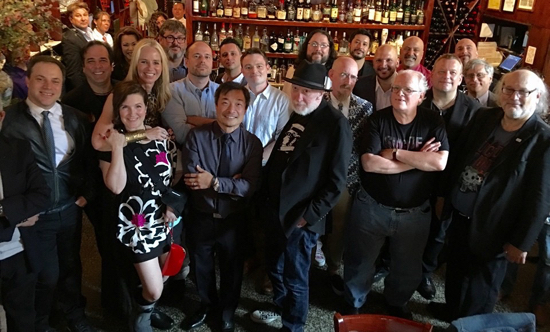 Last week I gave a review of the Suicide Squad movie. This week, I’m talking about my trip to NYC for the premiere.

I got in to the East Coast on 7/31 and stayed with my friends Tam and Kev English over in New Jersey, near to where I used to live. Tom Mandrake and Jan Duursema, who also live in the area, were going to be in town Sunday night before going on a trip so we all got together for a nice meal. Hilarity ensued. 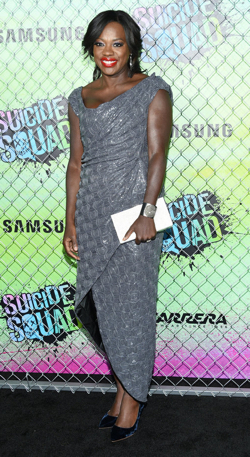 Tom and Jan also gave me a box full of Kros: Hallowed Ground booty. This is stuff that will be going out to our subscribers and it is killer cool.

I took the train into Manhattan on Monday to join my old bud and oft-time editor and my date for the evening, the lovely and effervescent Mike Gold.  We were meeting for a pre-festivities lunch. Among many other projects, Mike edited Legends, which is where my version of the Suicide Squad first appeared. True to form, I screwed up both the time and the location but eventually wound up where I was supposed to be, a little hot, a lot sweaty, but there.

It was a nice meal at Virgil’s BBQ (when with Mike, you’re quite likely to wind up eating barbecue) and then it was time to head out to the pre-premiere party being hosted by Dan Didio and DC Entertainment. On our way to a taxi (Mike suggested the subway but I was already overheated), we went to the heart of Times Square and there – lo and behold – was a huge frickin’ ad for the movie up on a building. It was at least four stories tall and wrapped around the building on either side. I was staggered.

On to the DC pre-party up at Pappardella on the upper west side. We were met outside by Jimmy Palmiotti and Amanda Connor; seeing Jimmy always guarantees a good time and Amanda graces the company of wherever she is.

All sorts of DC stalwarts were inside including some old friends like Paul Levitz, Mike Barr, and Keith Giffen. Was also joined by Adam Glass and his wife at our table in the corner. Adam had written the initial issues of the New 52 edition of the Squad and we were able to chat Squad shop. Great guy, good writer, and a fun table companion.

I also got to meet Geoff Johns face-to-face for the first time. We’ve traded more than a few emails but have never been able to be in the same place at the same time. Geoff has recently been promoted to President as well as Chief Creative Officer of DC Entertainment and I had a chance to congratulate him. He sat down and we had just a really good chat. In addition to being a really good writer, Geoff is a hell of as nice guy. 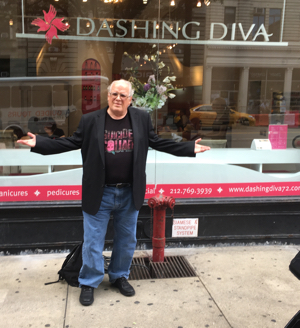 They got some group photos of all of us at Pappardella and then it was time to walk over to the nearby Beacon Theater for the premiere. We got off the buses and it was amazing: there was major security, both private and city, and barriers and people behind barriers looking for stars and celebrities. I was dazzled and dazed. I started to follow the herd towards the theater until I heard someone calling my name. It was Dan Didio as well as my date gesturing me over to a large air conditioned tent right there on Amsterdam Avenue. I mean, the air conditioning units were huge. I was supposed to go in that way. I wasn’t sure why but I went there.

Inside there was a backdrop and lots of press and photographers. I was in a spotlight and, swear to God, they were calling “John, look over here.” “John. Over this way.” “John, look straight ahead.” Flashes flashed and I had on my best deer caught in the headlights look. It was weird.

My baptism by strobes completed, I was escorted out of the tent and to the theater and given my assigned seat. The Beacon is no small theater (albeit a beautiful one) and every seat was assigned. I sat in the middle of the DC row and settled in. Geoff Johns was two seats to my right but the one right next to me was vacant. I decided that seat belonged to my late wife and frequent Squad co-writer, Kim Yale. Knowing Kim, she was having a blast.

Pete Tomasi, my one-time editor on a lot of The Spectre, Martian Manhunter, and The Kents, came over for a chat. It was great to see him; it’s been far too long. Pete‘s also a freelance writer these days and a good one.

I’ll admit to being dazzled. A lot of fuss was being made over me and more than a few people came up and said that this was my night as well; that none of this would have been happening without me. I guess that’s technically true but it’s a little hard for me to wrap my brain around.

Anyway, it comes time for the movie and the director, David Ayer, comes out to say a few words and he brings out the entire cast of the movie. Loud cheers all around. The cast walks off and the movie begins.

I reviewed the movie last week and I’ll double down on it. I’ve seen it again since then, with My Mary (who couldn’t make it to the premiere) at IMAX and in 3-D and I liked it even more. I understand that there’s people who don’t agree with me and that’s fine; different tastes for different folks. For example, Mary likes broccoli and I can’t stand it, referring to it as “tiny trees”. But I loved the Squad movie and I’ll see it still again.

One note about it and it’s a very minor spoiler. I knew ahead of time that they had named a building used in the movie the John F. Ostrander Federal Building. I knew it was there, I knew it was coming up and yet, somehow, I missed seeing it. The DC row cheered but I didn’t see it until we went to the IMAX. Go figure.

There were cheers when the movie was over and then it was time to get onto the buses and go to the after-party. It was held in a huge hall with parts of it made up to look like Belle Reve (I’m told it was on display at SDCC and then moved east). There was food, there was drink, there was a DJ and loud music; DC had a private area off to one side. I understood the stars of the movie were in attendance and had their own area as well.

This may surprise some folks but not, I think, those who know me well. I sometimes get a case of the shys; I feel awkward where I feel somewhat out of place. I saw Kevin Smith there and wanted to go up and talk with him but he was talking to someone else so I wandered off. I didn’t want to bother him.

The one person I did want to meet was Viola Davis who played Amanda Waller. Amanda is special to me and Ms. Davis did a superb job, IMO, and I just wanted to tell her so. First, I had to deal with security. I walked up to a guy guarding the artist’s area; the Hulk is smaller than this guy. Real tall, shoulders the size of a football field – nobody was getting past him. Nobody.

I went straight to him, explained who I was and why I wanted to see Ms. Davis. He was polite, got a hold of someone who had to go check on me. While I waited, he deflected two or three others. The guy was good at his job.

Finally, someone came up to take me back the handful of steps to –. I introduced myself and then told her how much I enjoyed her performance. She was very gracious and lovely. I think, although I’m not certain, that I did not babble unduly.

And then I was done.

I might have liked to say hello to some of the other actors and especially the director but, plain and simple, I’d run out of nerve. My date had already left to catch a train and it was time for me to do the same. Penn Station was only a block or two away and that’s where I need to go to get back to Tam and Kev.

I’m reasonably certain in my heart that Kim was there at the party. She would have been in her element. She was an extrovert and she would have been dancing and drinking and chatting with the stars and flashing that megawatt smile. I’m also reasonably certain she’s still there; at many a Con, Kim would still be partying while I went to bed. I couldn’t keep up with her.

I said goodbye to Geoff Johns, got to Penn Station and went back to my friends in Jersey.

It was an experience totally unlike anything I’ve ever had. I don’t know if I’ll ever have another one like it. Even if I went to another movie premiere, this was my first one. As they say, you never forget your first.

I was a temporary celebrity. I’ve done lots of interviews connected with the event and I’ll probably do a few more, told the same stories or given the same answers a lot of times. I’ve been dipped in the waters of fame. There were faces on the other side of the barriers in front of the theater or the after party, looking at me, wondering who I was. I must have been Somebody. For the moment, maybe I was.

I’m home now. The dishes need washing, this column has to be finished, and one of the cats wants attention. That’s who I am and I’m happy with that. The rest will fade as it should. I’ll tell you this, though – it sure as hell was fun while it lasted! For that night, I was John Fucking Ostrander with my name of the side of a building in a big ass movie..

Yeah. That was cool.