Ed Catto: A Guy and His Lion – Tarzan’s New Logo 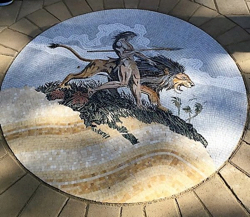 Hollywood embraces certain heroic brands time and time again. I think Dumas’ Three Musketeers (spoiler alert: there’s really four of them!) holds the record for movies most frequently adapted from a story. But another property has been capturing fans’ imaginations for over 100 years, and he’ll be swinging into theatres again this summer.

The Legend of Tarzan debuts July 1st. This movie stars Samuel L. Jackson, Margot Robbie and Alexander Skarsgard. Fans are hopeful. Of note, this movie opens with a “civilized” Tarzan in the city London. But the hardcore Tarzan and Edgar Rice Burroughs fans know there’s always something rumbling in the jungle.

In fact, I recently wrote about Tarzan: The Beckoning. Dark Horse is re-issuing the 80s miniseries by master artist Thomas Yeates. You can read my column here. But right now, I’d like to put on my metaphorical jungle pith helmet and explore a fascinating little story about iconography and corporate branding.

Edgar Rice Burroughs (ERB) created many memorable characters, but Tarzan is the most well-known. In fact, when ERB purchased land in the San Fernando Valley section of Los Angeles from a former LA Times publisher, he named it Tarzana. I’m sure you will agree it’s a much cooler name than Sherman Oaks. 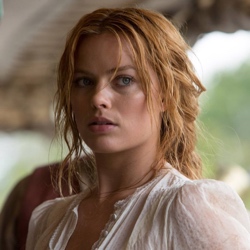 Way back when, the famous illustrator J. Allen St. John created an iconic image of Tarzan and the Golden Lion (ERB fans know the feline better as Jad-bal-ja) that became an icon, essentially offering up a visual shorthand to the sprawling adventure stories.

Years later, in the 60s, ERB commissioned Roy Krenkel to re-create the image as a corporate logo. It was used as a logo for years and years.

But there was one problem. In many instances, especially when used on letterhead and the like, it looked like Tarzan was riding the lion!

This just wouldn’t do for Jim Sullos, the President of ERB, Inc. During Tarzan’s centennial celebration in 2013, he enlisted longtime Tarzan artist Thomas Yeates to create another version of this classic pose. But this time, Tarzan would be standing in front of the Golden Lion – as he did in the original St. John version – so there would be no confusion.

And beyond letterhead, email signatures and corporate reports, it’s only fitting that this logo will live on in Tarzana. ERB, Inc., working very closely with the Tarzana Community and Cultural Center, has announced the creation of a mosaic logo based on Thomas Yeates’ illustration.

The new logo is from a California based company called Vita Luxury Mosaics, and the mosaic artist is Gail Rotstein.
It’s nice to see comics artist like Thomas Yeates have his work honored with such an enduring corporate image. And the updated logo is a beauty.

“It’s wonderful to see my art turned into a mosaic,” said Yeates. “Hats off to Roy Krenkel and J.P. Monahan for their earlier versions of this image. Now I wonder how else Burroughs Inc. will use the new logo?”

And you thought the Nike or Apple logos were iconic.

Oh, one more thing – Roy Thomas and Tom Grindberg are doing great work on the online Tarzan strip at the official Edgar Rice Burroughs site. Stop by and check ‘em out!