Zorro Comes To Your Home! 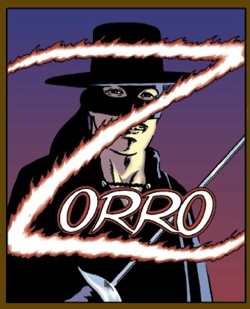 Last week we told you about two upcoming collections of Don McGregor and Thomas Yeates’ Zorro newspaper strips as part of a broader profile of Tom’s recent work. As it happens, this week will see the rerelease of Zorro – The Dailies and Sundays (The Second Year) Collector’s Edition, reprinting all the daily and Sunday strips from the 1999 newspaper comic strips’ second year… and, through the website below, autographed by Tom Yeates.

Also for the first time, the entire two years of their Zorro newspaper strip are collected in Zorro – The Complete Dailies and Sundays. This latter hardcover edition will be limited to only 50 copies and will be signed by all Don McGregor, Tod Smith and Thomas Yeates.

Zorro was introduced as a revolutionary character for old California in pulp adventures by Johnston McCulley. Following a critically acclaimed comic series from Topps, the Zorro newspaper strip debuted in 1999 and was written by Don McGregor and drawn by Tod Smith, Thomas Yeates and Rick Magyar. The strip appeared in major newspapers across North America. The series was clearly a labor of love for these creators, all the while paying homage to past creators while still offering fresh and exciting new adventures.

Both editions will be published July 25, 2016. Fans can preorder before that date at www.ZorroDailies.com or www.ClassicHeroes.de.