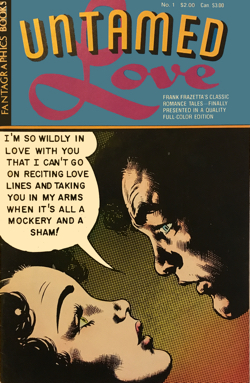 I’m still reeling – in a good way – from Syracuse’s Salt City Comic-Con. It was a fantastic comic convention where I had way too much fun. And I’ve got some observations to share with you about it, but they’ll have to wait until next week.

Let’s start with the “full disclosure” routine. I’m at the point where my comic collection is way too large, and I’ve been taking the steps to prune it back over the last few years. I’ve found this process difficult to adjust to, but my wife and I are in that downsizing mode. Surprisingly, I’m finding that maybe I am not that much of a hoarder after all. I actually feel better when I get rid of stuff.

But… I can’t help but wander a convention and stumble across a few treasures. And I was delighted with what I found at Syracuse’s Salt City Comic-Con.

In a 50-cent long box, I found this fantastic copy of Fantagraphics’ reprint title from 1987, Untamed Love, showcasing Frank Frazetta stories. Even though this reprint collection was published thirty years ago, the comic felt pretty new. The coloring is vibrant and the high-quality paper really holds up. The stories are a bit silly, but that Frazetta artwork is gorgeous! 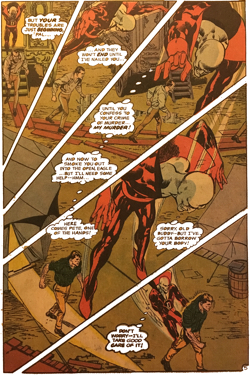 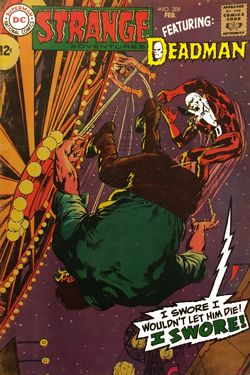 Neal Adams was our guest of honor and, as he often does, told us few stories. Iwas especially intrigued when he revealed he’s working on a new Deadman series. I pressed him for details, and instead of offering just a few coy or cryptic teases, he outlined the whole first issue. And then he showed me the page he was working on. I was really impressed and think it will be his best work in years.
So… in anticipation that new series, I picked up a reading copy of Strange Adventures #209. It was a thrilling story with innovative storytelling and clever page layouts. The big climactic fight atop a Ferris wheel kicked my vertigo into high gear. I have trouble with heights these days, and that frenetic battle above the midway isn’t going to help matters.

Of note: there was a circulation statement in this issue. It turns out Strange Adventures was reported to be selling 146,600 issues each month. I find that so astounding, especially compared to today’s print runs.

I just loved the cover to Girls’ Romances #160 and couldn’t resist snagging it. The brilliant Jay Scott Pike is the artist. While the composition is solid and strong, the non-traditional sketchy, scratchy line work was what grabbed me.

It turns out this was the last issue of this long-running series. By this time, they must have decided it wasn’t worth it to create new stories. Inside are reprints of old John Romita stories – but the women’s hairstyles were retouched to give it a “modern” 1971 feel! These bizarre edits create a double layer of retro. 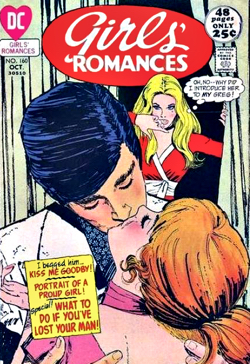 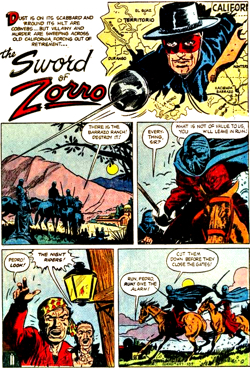 Most fans fondly remember those Antonio Banderas Zorro movies from a few of years ago. My dad was just watching it on cable, in fact. And comic fans all agree that Alex Toth’s Zorro comics were a pinnacle for that character. So I was pleasantly surprised to find myself buying Zorro – The Complete Dell Pre-Code Comics from the Hermes Press booth at the con. It’s a totally different version of Zorro.

Hermes Press was an energetic and committed exhibitor. I may be a bit biased, as I do like so many of their books. They created two convention exclusives and they were selling everything at a discount, so all attendees found a lot to like about their stuff.

In the forward of the Zorro collection, ace author Max Allan Collins provides a brief history lesson about the main artist of these stories – Everett Raymond Kinstler. I wasn’t familiar with this artist, but he is work is evocative and often confused with, Joe Kubert’s style from the 50s. “You had me at Kubert,” I thought when reading the forward.

It’s a tremendous book and after I read it, I think it deserves a spot on my coffee table. Then after a while, I’ll lend it to my dad. Another treasure from another comic-con.