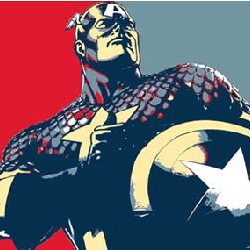 Deep inside a bunker, equidistant from MSNBC, CNN, Fox News, and Univision, the remaining candidates vying for President of the United States secretly meet. Please note they do this every couple of days.

Lowly PA: Sirs, Madam, I wanted to bring this item to you, as you may be handed some softball opinion questions in the next news cycle. That is if Donald hasn’t spouted off something racist that needs to be covered.

The Donald: Not this week, you loser.

PA: Thank you, sir. May I have another sir? Anyways… So, Nick Spencer – a comic book writer – has penned a recent issue of Captain America wherein Steve Rogers has turned out have been brainwashed by Hydra for decades. This rewrites whole swatches of his origin, potentially. But I should note the story has only just – 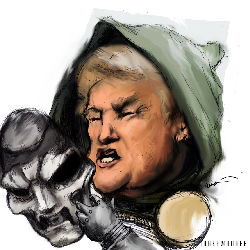 The Donald: Weak! Pathetic! What a loser. I mean, look, are there some great yuge stories about Steve Rogers? Yes. But none by this guy. Who, not that I’m saying anything wrong here… but Spencer is a Mexican. I personally gave over 12 million dollars to Marvel to stop this. But I think they are being run  by… well… the guy is named “Alonso.”

Hil-Dawg: *Cackling Laugh* Oh, Donald, you slay me! But I think we should all take a minute or two to come to a consensus about how we’ll react to this.

Comrade Sanders: Hilary, Donald… I think this is indicative of the fat-cat Wall Street Mickey Mouse Militia out to push an agenda to usurp more powah’ for the one percent! Furthermore –

Hil-Dingo: Just so you know, it actually doesn’t matter what you answer. I’ve already won. This opinion question. The nomination. And the Presidency. But I recognize your right to continue…

Bernie waves an angered hand from his rumpled Men’s Warehouse Special towards the Secretary of State.

Don Juan DiRacist: Look. I love Marvel Comics. Marvel Comics loves me. That they could let this baddy bad badness to occur is just another reason we can’t have Crooked Hilary or Crazy Bernie in charge. Steve Rogers should be a Trump University graduate who fights ISIS and beats them. You’ll see that when I’m President.

Hil-Django: It’s a nice thought. But just like tickets on Trump Airlines, I’m not buying it. I think the smart money says we stay conservative about this Captain America issue. When my husband and I were President in the 90’s, Captain America was an unwavering success. It’s clear that this is just another attempt by the GOP to get in the way of the rights for characters to have retconned background stories for the sake of new fiction.

Burning Man Sanders: Mista’ Trump? Steve Rogers is from Brooklyn. Like me. He fights for the 99%. Miss Clinton? In the 90’s, you’ll denote I wrote many a’ bill to try to stop things like Captain America’s laser shield, Heroes Reborn, and several other complete mishaps during the time President Clinton should have been reconsidering Glass-Steag –

Hilary pulls out an air horn from her purse and honks it angrily at Senator Sanders.

Lowly PA: Gentlemen, Mrs. Clinton… We really need to come to a consensus here. Meet the Press is going to ask each of your communication directors about your stance on this topic in just an hour or two! And the people of America are screaming bloody murder! Some people are livid that there would be such a retcon to a seminal staple of the American spirit. Others are just casually awaiting the arc to end before jumping to conclusions.

Drumpy-Dumpty: Nate Spicer is a Mexican. When I’m President, we’re going to destroy these copies of the book, rewrite the backstory, and make Captain America great again.

Feel The Burn: I think Mr. Spencer is a good writer. Would I have taken such a drastic step in the first issue of a long arc? Potentially. But I think it’s key that we hear the complete story, and work togetha’ to ensure that Captain America doesn’t allow Wall Street to be too big to fail!

Hilarious Clinton: It’s clear to me now, that I feel the same way as any woman would at a time like this. When the country needs to still be this divided over a male-centric issue? It’s a shame. And one that I’ve been fighting against for years. And I’ll fight it more… over the next four years. When I finally take my throne as promised.

The three candidates get up from their seats. They exchange pleasantries and perform the ceremonial secret handshake. Donald Trump then puts on his traditional Latverian tunic, finger-extending gauntlets, and sorcery-empowered armor. He seals his craggy orange facade behind the mask of Doom, and flies out of the cave, to an awaiting mass of white supremacists. I mean… Latverians. Hilary Clinton gets into her Goldman-Sachs’ LexCorp Power Armor™, hugs an awaiting Loki, and promptly teleports back to her secret Harlem think tank. Bernie Sanders tears away his Robert Hall Special revealing a more frumpy Mervyn’s, and plinks away at his 2005 Blackberry. He calls to ensure his greyhound tickets are in order, and takes the stairs towards the street-level shelter to await his bus back to California.

Nick Spencer remains secluded in his own private bunker while the baby boomers all get their death threats in order. He reminds himself that it’s just fiction, he does have an editor who approves his scripts, and, thanks to Doctor Doom, the compelling feeling that there really is no bad publicity anymore.