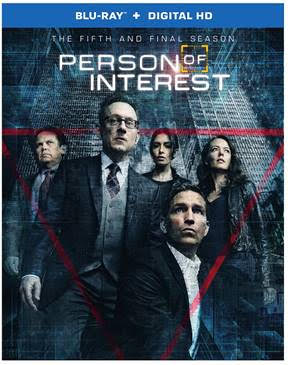 This week, CBS began the twice-weekly airing of the final 13 episodes of Person of Interest. The series is dark, compelling, and addresses many of the privacy and cyber-terrorism issues we’re wrestling with in our world. They just do it with an attractive cast and solve things every 60 minutes. Here’s the official word on the final season collection.

BURBANK, CA (May 4, 2016) – Warner Bros. Home Entertainment (WBHE) is set to release one of television’s most compelling, action-packed, crime dramas, Person of Interest: The Complete Fifth and Final Season on Blu-ray™ and DVD. Available July 19, 2016, the final season will include all 13 season five episodes plus the “Finale for the Fans” featurette, the show’s 2015 Comic-Con Panel and more bonus content. Season five finds the team of covert crime fighters faced with the potential demise of The Machine as its rival, Samaritan, begins to take control. The release will retail for $39.99 SRP for the standard DVD edition and $44.98 SRP for the Blu-ray™ edition. Person of Interest: The Complete Series is also available on Blu-ray™ and DVD on July 19, 2016, with SRPs of $169.99/$129.99.

In season five, the cold war is over. The world might appear to look the same, but something has drastically changed. Samaritan’s lethal “correction” has initiated its control. Finch’s Machine is essentially dead. Shaw is still missing. And the team is once again hiding in plain sight. But with Samaritan’s invisible grip tightening everywhere, will Finch be able to rebuild and resurrect The Machine? And if he does, will it be the same Machine when it comes back online?

“Season after season, Person of Interest has kept viewers completely engaged. It was a brilliantly crafted series with intriguing story lines, complex characters and outstanding production that will definitely be missed. The premise of the show was timely, relevant and thought provoking,” said Rosemary Markson, WBHE Senior Vice President, TV Marketing. She added, “We are delighted to release the fifth and final season in addition to the complete series set on Blu-ray and DVD for devoted fans to be able to re-watch this action-packed series.”

Since the series debuted on CBS five years ago, Person of Interest has continued to captivate audiences and remains a consistent fan favorite among viewers.