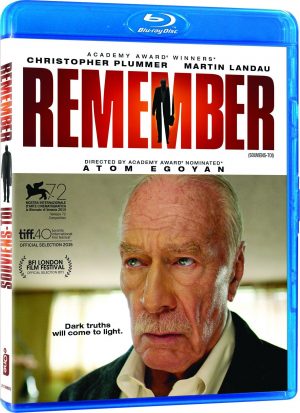 We have probably reached the saturation point of fiction in film and prose about the Holocaust. While it remains an intensely personal tragedy for those connected with it, dramas about those horrific years have all begun to gain a sameness. Dark, moody, sad and when well done, incredibly affecting. That was certainly the way I felt when I first heard the latest entry in the genre, Remember.

What made it compelling to sample was the notion that this was largely going to be a two person drama and when those two happen to be Christopher Plummer and Martin Landau, you pay attention. Both bring decades of experience to the screen and in their twilight years, have a gravitas that adds to their characters. The film, from director Atom Egoyan, is about the Holocaust but it is also about friendship, memory, and justice. Heady stuff and overall, the movie works.

Plummer is Zev Guttman, a survivor of Auschwitz, and now a widower, living out the end of his days in a nursing home. Complicating his grieving is the Alzheimer’s that makes memory an iffy thing at best. His friend at the home is Max (Landau), who pokes, prods, and forces Zev to recall details of their joint incarceration at the Germany Concentration Camp and the guard Otto Wallisch, who Max blames for killing both their families.

As we learn, Max believes Wallisch escaped Germany and assumed the identity of Rudy Kurlander and he is making it his mission to find and expose the man. He has found four with that name and needs Zev’s help in determining which is the killer. Screenwriter Benjamin August adds in twists and turns to sustain the suspense up until the final scenes when he hammers the audience with a powerful, shocking and somewhat incredulous twist.

Most survivors of the Holocaust refuse to forget it but they also don’t dwell on it overly much. The subtext here is that Zev’s fading memories are all Max has for confirmation of his suspicions and both men are reliving days best left in the past.

August does a good job setting things up and establishing the difficult circumstances haunting both men. He is aided very much by the winning performances from the leads, who avoid chewing the scenery but relish the complex men they were given to portray. They make the film enjoyable to watch even if elements are far-fetched and Egoyan glosses over them with some nice shots.

It is especially fitting that Lionsgate Home Entertainment released the home video edition this week, being the 70th anniversary of Auschwitz’s liberation. The high definition transfer looks fine. The muted colors and rich shadowy detail is well captured in the high definition transfer. The film itself was shot digitally by cinematographer Paul Sarossy with Arri products and the result looks good. The DTS-HD Master Audio 5.1 track is adequate for our needs if unspectacular.

The disc comes with just a few standard features including the Audio Commentary with Egoyan, Producer Robert Lantos, and August and an electronic press kit package, Performances to Remember (16:49), giving props to the stars; and finally A Tapestry of Evil: Remembering the Past (13:47), a look at the real history of efforts to bring Holocaust enemies to justice.