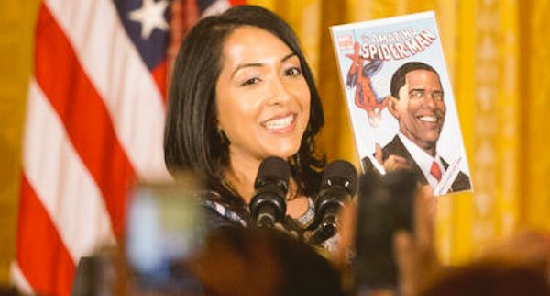 Comics in the White House!

My esteemed colleague, Mindy Newell, recently noted that our current president is a big ol’ comic book nerd. We knew that. Way back when this site started up, we ran the photo of Obama in Metropolis, Illinois, striking an iconic pose next to the Superman statue. 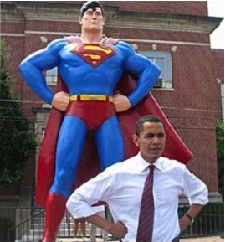 Last week, as part of its celebration of Women’s History Month, our Geek-in-Chief invited Marvel Comics’ Sana Amanat to the White House to celebrate. Amanat presented the President with a copy of Ms. Marvel.

While this is not the first time super-heroes have had an official White House Moment (indeed, I was there for the launch of the anti-landmine comic DC created for UNICEF, and if I could find it, I’d post the picture of me with Hillary Clinton), it is perhaps the most heart-warming. To have a person who is not only female but also Muslim and Pakistani-American with the President to represent comics is an enormous change.

It helps that Sana does brilliant work on great comic books. I mean, really, look at how cool she is. Still, I think that she could have been every bit as talented twenty years ago and never received the attention she has, or been able to take advantage of the opportunities she deserves.

So, just when I was feeling like my beloved comics community was growing up, I read this announcement that the Comics and Cola blog was shutting down. I confess that I didn’t tune in there that often. The woman who ran the site, Zainab Akhtar, is an English Muslim, and her perspective (check this out for a taste) is quite different from mine, which I love. I should have tuned in more.

Apparently, the last straw for her was best expressed in this post by Kim O’Connor. O’Connor saw her work dismissed by a white male comics critic based on nothing more than his entitled perception that her opinions didn’t matter. He’s a white man in his 20s, so obviously no one is qualified to reasonably disagree with him.

(That is much too simplistic an analysis, I know. Read the link. It’s great.)

As a straight cis white woman, I’m very much aware that I miss a lot of subtle bigotry. I can watch an entire night of television with stories about white people (who might have sassy black friends) without noticing how skewed that is. When a protagonist’s race and gender are not specified, I often assume that person is male and white.

It’s a habit from my 60+ years in the culture. It’s a bad habit, and one I struggle to change. Not only is it wrong ethically and morally but, more important, it limits my enjoyment of the world.

The President gets this, even if 20-something white boys don’t. But then, we no longer assume that the President can only be a straight cis white man.