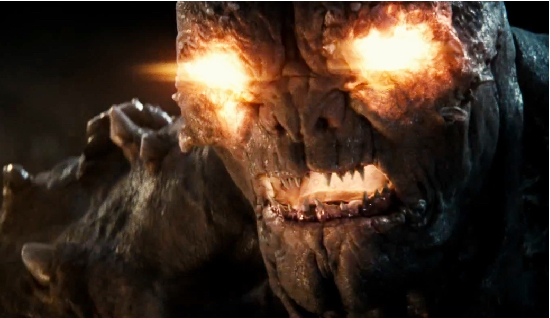 Let’s get this point out straight away: I haven’t seen Batman v. Superman: Dawn of Just Angry Dudes Who Like Destruction-Porn.  Beyond the trailers, I have done everything in my power to not read spoilers. I’ve put on blinders on whilst perusing my social media feeds, allowing me to catch only shreds of the shared rage boiling over amongst my closest 927 friends. So, my column this week explores the deeper issue fans are complaining about the most these days: gritty realism.

The clamber in the streets is about how DC is taking itself too seriously. How leaning into grit, grime, explosions, and death is ruining childhoods, and fans. But I beg the question: when your director previously worked on 300, and the lukewarm sepia-washed Watchman adaptations and delivered his own mighty opus in the video-game-cum-popcorn-film Sucker Punch, well, pardon me: what the fuck did you think he was going to do with Batman and Superman?! The output of Snyder shouldn’t come with a single measurable iota of surprise.

The deeper issue then gets tied back to Chris Nolan’s interpretation setting the table for what has come since. Batman Begins, The Dark Knight, and The Dark Knight Rises were once applauded for removing the kitch from the Bat-franchise. Nolan’s Knight was as real as you could get with the base-concept. The interpretation of the Joker was chilling – and not in the gutter-punk way Jared Leto appears to be aping Ledger’s performance mind you. And Bane? Well… he spoke in a weird accent, and had an appreciation for coats of the 70s. Those three Bat-films begat what we’re getting now. And that includes the popcorn fart that was the spectacular – Trump-level – Green Lantern movie.

So why is Marvel so beloved? As we’ve seen the table set for Civil War… for all the fun we had laughing at SHIELD agents playing Galaga, and Ant Man cracking wise, we’ve been privy to just as much world destruction. New York? Invaded. Washington D.C.? Had helicarriers dropped on it. And that fake-sounding country in Avengers 2? Well, it done went and turned into a low-grade meteor. Pair that with a few Hulk-smashed cities, and all those dead goats in Ant Man, and you have plenty of grit to chew on.

The difference being the actual plot and characters in service to it.

Man of Steel, much like The Avengers featured the destruction of a city (and maybe a few suburbs). Iron Man, Cap, and pals were lauded as witty-brilliant. Kal-El was deemed a dour dolt by the very same folks. One movie was held up in reverence. The other, kicked to the dollar bin with a sigh. For the record? This is as it should be. The Avengers took the time to showcase their heroes making attempts to save the people of New York. Superman was basically shown punching for the last 40 minutes of his film; subsequently followed by the murdering of the villain, a quick bit of snark, roll credits. It would seem, based solely on the 10-20 sentences I’ve half-begun to read on my feed… BvS is much in the same vein. And not a surprise either… I saw the trailers, and can put one and one together.

Spoiler-free knowledge of BvS dictates that Batman was in Metropolis during the Kryptonian scuffle. And true to his comic-counterpart (to whatever degree you agree with me), he sees an unchecked level of power on display and finds need to be fit to control it. Superman is the gun that took Bruce’s mom and dad until he can prove it otherwise. What follows – I’ll safely assume – is 90+ more minutes of fighting, yelling, and teeth gnashing. And Wonder Woman is there to make girls happy or something.

Don’t get me me wrong. I believe we need to look to our ComicMix cohorts Mike Gold, Denny O’Neil and John Ostrander when we talk on the topic of grit and realism. Pick nearly any yarn spun (and edited) by those gentlemen, and you’ll see how the heaviest of topics can be touched on without leaving a fanbase in ruin. Hell, check out the very first issue of Wasteland, and ask how the material could be covered within its pages and still leave you with a bit of a smirk.

When it comes down to it, I will see the new Batman and Superman movie. I’ll do my best to withhold judgment until the last frame is projected. I’ll do whatever I can to suppress expectations to anything higher than a whisper. I’ll give credence to the filmmakers, writers, and producers to prove to me they have a way to bring the heroes and villains of their catalog to life in direct completion to the House of Mouse.

But, at the end of the day, the devil is in the details, not the CGI decimation of untold thousands. So, I’ll just guess there won’t be a need for any follow up review, kiddos. No worries: Civil War is just around the corner.