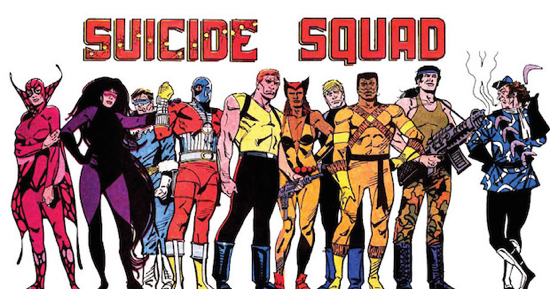 Sorta Spoiler Notes: Today I’m discussing the latest Suicide Squad reprint, Rogues, and I’ll disclose some plot points. The stories were originally published in the late 80s so a spoiler shouldn’t be needed, but just in case you didn’t read them back then and are considering catching up now, you been warned!

One of the nice side-effects of the upcoming Suicide Squad movie is that DC is pushing into TPB print my original run. The latest volume comes out April 12 and is entitled Rogues and it’s maybe my favorite one so far. It reprints issues 17 through 25, including the Annual and a Bronze Tiger solo story by Larry Ganem and Peter Krause.

A quick rundown on the Squad. The Original Suicide Squad was created by Robert Kanigher and Ross Andru and debuted in 1959 in The Brave and the Bold #25. They were pretty much a version of Challengers of the Unknown and featured three guys and a gal. They appeared for five issues of B&B and then… nothing.

I revived the title in 1987 ands re-invented the group as a cross between the Dirty Dozen and the Secret Society of Super-Villains. Incarcerated bad guys were sent on covert missions for the U.S. and got time shaved off their prison terms – if they survived. Not all did.

In this latest TPB, we were getting into our second year and really hitting our stride. The book was constantly changing (I liked to try and keep things fresh) and one of the big changes was that my wife, Kim Yale, came on as co-writer. Kim had been itching to get into comics and I wanted to spread out my burgeoning workload. She loved the whole idea of the Squad and brought a lot of herself and her energy into the book.

Kim and I usually had different work/sleep schedules. I was a morning person and Kim always felt that there was nothing wrong with the morning that sleeping until noon couldn’t fix. We each had our own Mac but they weren’t connected. In those days, to share you had to put things on a floppy disc and then exchange them. (Millennials, go ask your parents  or Wikipedia what floppy discs were. We’ll wait.) I was the senior writer; I had the most experience and I had guaranteed the quality of writing with our editor, Bob Greenberger. If Kim and I had story or script disagreements (and we did) that we couldn’t resolve, I had final say. Kim didn’t always like that but she agreed.

When scripting, we would divide up the issue, work different scenes, and then exchange them. Kim would do a re-write on mine, I did one on hers, and if we disagreed, we’d work to resolve it. Today I couldn’t tell you which part was Kim’s work and which part was mine and that’s as it should be.

Two key things happened in this group of stories. First, we introduced Oracle who, originally, was just a voice coming from a computer. At this point, Oracle was an outside hacker who got into the Squad’s computers. It would be a while before we revealed who it was to the readers. Spoiler: it turned out to be the former Batgirl, Barbara Gordon, after she had been crippled by the Joker in The Killing Joke. Yeah, they said it wasn’t really in continuity but all the fans thought it was and so did we.

We also introduced the running joke of the pie-in-the-face gag. Starting with Amanda Waller, every so often someone would get pied; the mystery of who was doing it wasn’t revealed for a long time. I can’t believe how long we pushed it. For a book so grim and gritty, we did classic slapstick every now and then. Keep things shaken up.

Also for humor, we added the characters of Punch and Jewelee. Kim and I never did use the Joker and/or Harley Quinn in our version of the Squad. Too many strings attached to really get to play with them as we would have wanted. Punch and Jewelee were fun loving sociopaths in a similar vein to the Joker and Harley. They were married and over-sexed as well as homicidal. “Now I’m going to make you eat this salami!” One of my favorite lines. I continue to deny that Punch and Jewelee were in any way based on Kim and me and our married life. Deny deny deny.

We also added Killer Shrike to the line-up. She had sonic abilities and “accidently” killed people but, as we wrote her, she had “found Jesus” and was working her way to the Lord by serving with the Suicide Squad. That girl just wasn’t quite right in the head but fun to write.

This series also had one of the best twists we ever did. Senator Cray and his political associate, Derec Tolliver, were trying to blackmail Amanda Waller into doing dirty work for them by threatening to publicly reveal the Squad. This is a case of two dopes thinking they are smarter than they are. Waller, of course, found a way to reverse the tables on them but she didn’t bother to tell the Squad’s leader, Rick Flag, who decided to take matters into his own hands and kill the two.

Waller finds out only after (Spoiler) Flag kills Tolliver. She then sends the rest of the Squad out to stop Flag from killing Cray “by any means necessary.” She would have cause to regret those words.

It was Deadshot, Floyd Lawton, who found Flag just as Flag was about to shoot the Senator. Deadshot had just returned to the Squad after the tragic events of his own miniseries and mentally was not very stable. He found a unique way to keep Flag from killing the Senator (Spoiler) – by killing Cray himself.

A lot of stuff happens in this volume – characters come, characters go, characters die. The usual unusual stuff with the Squad. We get a touch of the personal lives as well; we even get to see Waller deal with family and you get very much the sense she’s rather deal with the criminals and sociopaths that make up the Squad.

It’s interesting to me (at least) that, in the beginning, I wasn’t even sure I could write a team book. I found it to be terra incognita. By this point in the run, I felt a lot more secure. The blend of personalities really clicked for me and getting to work with Kim was just an additional pleasure. Most of the time.

DC is going to release another volume of our Squad stories in July, just before the movie comes out in August. That makes sense. Get ‘em out while the interest is there. I’m hoping that they’ll continue to collect the Squad afterwards as well; they’re almost half the way through the run now and it would be nice to have the whole thing gathered.

Now, if I can just get them to collect Wasteland…